The morality of economics 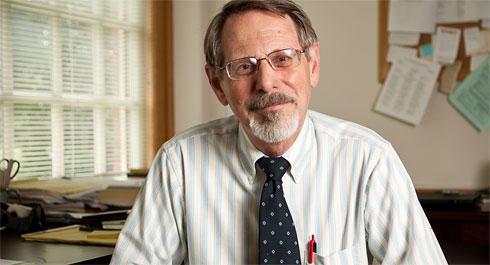 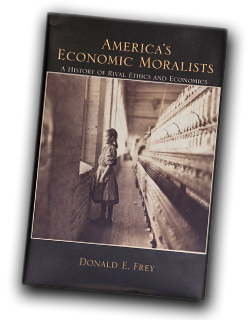 Professor of Economics Donald E. Frey presents two alternative economic moralities in his new book, “America’s Economic Moralists: A History of Rival Ethics and Economics” (State University of New York Press, 2009). One ethic is “autonomy morality,” based on the idea that individual freedom to pursue self-interest should be paramount. The other is “relational morality,” starting from the premise that individuals have economic rights and obligations defined by their relation to the human community. Using an interdisciplinary approach, the book draws on both moral and economic thought from the Colonial Era to the present.

A. That is the most common comment I hear from people. Actually, I’d be more optimistic if there was universal agreement that economic practices are automatically immoral or wrong. We could then agree what reforms and enforcement were needed. The hitch is that autonomy morality legitimizes, in the minds of those involved, the very practices that many other people see as wrong. Thus, many economic actors, who do what others believe is wrong, feel morally justified. Similarly, this type of morality motivates a political defense of such practices.

A. It makes the autonomy, or freedom, of economic actors into the greatest good. Dating from Adam Smith, this ethic declares that pursuit of economic self-advancement produces the public good, even if that outcome wasn’t intended. Once that becomes an article of faith, a whole morality can be based on it, including rights, virtues, obligations, and so on. Given this article of faith, evidence that self-interested actions can actually harm the public good is easily shrugged off or rationalized.

Q. What about relational morality?

A. Relational morality understands that individuals exist in relation to other humans and society. This premise is embedded in biblical religion and many academic fields other than economics. From the reality of human kinship flows obligations and rights.

Q. So is there a link between what you believe in terms of economic theory and morality?

A. Yes. That is a major point of the book. At the most basic level, if economic theory “proves” that something can’t be done, then moral obligation vanishes. You can’t have a moral obligation to do the impossible.

For example, 19th-century laissez-faire took the view that unchangeable economic laws, like laws of nature, made reforms of economic ills impossible. That kind of “science” undermined any obligation to deal with those ills. Thus, autonomous individuals were left unencumbered by moral obligation for change. Reformers were dismissed as sentimentalists who were also ignorant of economic laws.

On the other side, relational moralists tend to view the economy as a system, created by humans, which can therefore be changed by humans. If the economy is a system, then people have much in common, because all are in the same boat. The idea of scarcity is less prominent in relational thinking than in orthodox economics. There are enough resources that good institutions can eliminate the worst economic ills.

Q. Can you give an example of the differences between the two theories on a particular issue?

A. Let’s look at property rights. Autonomy morality tends to view private property as bestowing absolute rights, which give an owner ultimate freedom to do as he or she wills. Relational morality views property rights as conditional on the good they can do both for the individual and the community. The biblical idea of “stewardship” in the use of wealth comes close to the ideas of relational morality.

North Carolina just provided a perfect example of this in passing a new law banning smoking in restaurants and bars. Opponents of the ban argued that the ban infringed the property rights of the restaurant owners, which should trump everything else. But advocates of the ban implicitly held that property rights are contingent rights — and in this case the public health was more important.

Q. Why are these theories important in understanding current economic problems?

A. Actually, the book is not mainly about past or current events. However, it is very easy to see certain patterns. The recent Wall Street excesses were the climax to an era of deregulation and non-regulation. Deregulation was based on economic and moral arguments that maximum economic freedom (and faith in self-control) is better than social oversight. For example, former Fed chairman Alan Greenspan, who should have been an active regulator, was a disciple of a mid twentieth-century autonomy thinker.

Another example is the 2005 attempt to change Social Security so that everyone would have a “private” account, like an IRA. Society would have given up any responsibility for how individuals fared. This proposal clearly represented autonomy morality shaping policy.

I do not believe that economic morality alone produced all this — but do believe it was an important motivating force for major actors.

Q. You write about the “culture of excess” today being a fruit of autonomy morality; can you explain that?

A. Autonomy morality asks free individuals to set their own limits. That would be fine except that humans are so capable of rationalizing things that few people will actually restrain themselves when their own gain is at issue. Ironically, no colonial Puritan, with a Protestant sense of sin, would ever have fallen for the idea that humans can consistently set reasonable limits on themselves.

In recent decades, neoclassical economics has pushed the idea that competitive markets guarantee economic efficiency. The policy conclusion was that markets should be freed of most regulations to allow self-interested actors the fullest sway in the greatest number of markets. By my reading of it, deregulation opened the door to excess in the financial markets. The first wave of financial deregulation, in the 1980s, produced excesses that culminated in the savings and loan crisis of the late 1980s. But that lesson was ignored, leading to the debacle of 2008.

Q. Do autonomy and relational morality correlate with capitalism and socialism?

A. No. Both moralities are individualistic moralities. Autonomy morality obviously takes individualism to an extreme and does tend to favor laissez-faire capitalism. But relational moralists also are individualistic and typically were highly critical of Marxism. For example, the pioneer of universal public education, Horace Mann, insisted that educational curriculum should respect and develop the individual character of students. Many relational moralists are religiously sensitive, and they do not accept the materialism of Marxism. If autonomy morality favors unbounded capitalism, or laissez faire, relational morality is content with bounded capitalism, or markets with limits.

Q. In your book, you make the argument that relational morality is biblically based. Can you explain that?

A. Historically, the ideas of “love of neighbor,” humans in “the image of God”(giving dignity to all), and true freedom being “freedom from self” (not the pursuit of self-interest), are clearly biblical. This was the outlook, for example, of the Puritans, the early Quakers, the abolitionists, the Social Gospel writers, and more recent religious writers. And this colored their economic morality. However, human kinship and community are so fundamental that people of no particular religion could easily accept the point of view.

In his acceptance of the Democratic Party’s nomination, Barack Obama affirmed the “fundamental belief that I am my brother’s keeper, I am my sister’s keeper.” This is biblical language and relational language. It is very different from the autonomy language that permeated the previous administration, which held out the ideal of an “ownership society,” presumably made up of private wealth.

Q. What about the cover photo on your book?

A. It shows a ten-year-old girl at work in a textile mill around 1910. She is gazing out the window, while behind her is a massive row of machines. For a second, she has turned away from the labor that dominates her young life, to look out where her life might have developed more fully. My book only incidentally touches on child labor. But it is one moral issue that clearly showed the distinction between autonomy morality and relational morality in an earlier age. Autonomy morality would have held that her parents had the freedom to decide her future, and that they, not reformers, knew what was best. Reformers argued that persons had the right to develop their full potential as human beings, and that a society owes children better opportunities to develop fully.