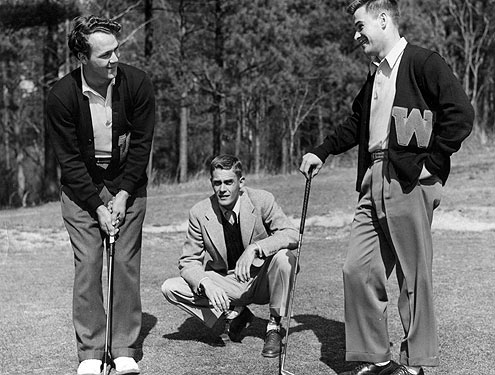 The “official” version is that it was all just a twist of fate. Wake Forest College had landed a big recruit for what was, at the time, a very small intercollegiate golf program. Buddy Worsham, whose older brother Lew had won the U.S. Open, was coming to Wake Forest on an athletic scholarship.

But before the pact could be finalized, Worsham had one final request. Could a good friend come with him? “Can he play golf?” asked Jim Weaver, the Deacons’ athletic director at the time. As it turns out, Arnold Palmer could.

Palmer turns 80-years-old on September 10, and his ties to Wake Forest couldn’t be stronger.

“I have had a love affair with Wake Forest since my undergraduate days, but I didn’t realize until many years later what I had truly learned at Wake Forest, both in and out of the classroom, about the meaning of a productive and meaningful life,” Palmer said in his commencement address to Wake Forest graduates in 2005.

When he arrived on the Old Campus in the fall of 1948, Palmer simultaneously launched a collegiate golf dynasty and one of the greatest careers the game has ever known. He was the first ACC champion in 1953 and won the U.S. Amateur Championships a year later before turning professional.

His dazzling arc across golf’s tradition-soaked sky was more than a career. It was a full-fledged phenomenon. Yes, he was a terrific player, good enough to win 92 times worldwide in a professional career now in its 55th year (He still plays a tournament or two). But what made him unusual is that he wasn’t just a good golfer; he transcended the game to become an iconic figure.

Golf fans and non-golf fans alike were captivated by his aggressive style of play, his gracious personality and his “common touch.” He was also, as it happened, a caring and thoughtful person, whose acts of random kindness were so numerous that at some point they no longer seemed random at all. He came from a working class family and never forgot his roots. People admired and adored him, following him across courses nationwide in throngs so large they were often referred to as “Arnie’s Army.”

Today, he is as active as ever, heading up a number of charities and supporting dozens more. But nowhere have his ties been stronger than with his alma mater. He has served on the board of trustees and has been Wake Forest’s unofficial ambassador around the world. When Wake Forest needed someone to face off with Louisville’s honorary captain, boxing legend Muhammad Ali, at the 2007 Orange Bowl, Palmer was the obvious choice (and he even delivered the pre-game pep talk).

He co-chaired the University’s Heritage and Promise campaign in the 1990s and recently teamed with another Wake Forest legend, Ed Wilson (’43), to lead a new initiative to raise scholarship funds for Wake Forest. Palmer himself established the first golf scholarship at Wake Forest in the 1960s, in honor of Buddy Worsham, after his good friend was killed in a car accident while they were both still students. It’s all part of giving back, repaying a debt, as he explained in a speech to alumni last summer.

“Jim Weaver made a commitment to me, to play golf at Wake Forest on a full scholarship — at the time I had no idea what that meant,” he said. “Today, I know what that means.”

Palmer grew up in western Pennsylvania’s Laurel Highlands, the son of a golf course superintendent/golf pro named Milfred Palmer. Even in bygone days, when names were a little different, Milfred was a tough handle to handle. Thus, early on he picked up a nickname. His friends called him “Deacon.”

Naturally, his son became one.

Tucker Mitchell is a writer living in Huntersville, N.C.