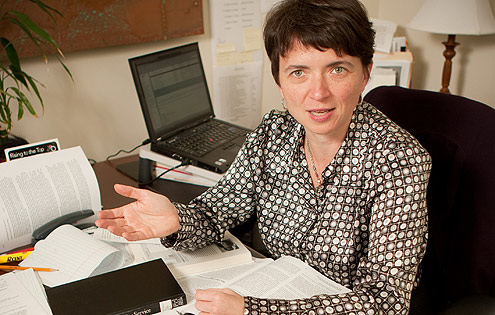 Three years after the FDA approved the drug Gardasil as a vaccine for human papillomavirus (HPV), less than one in four women in the target age group have been vaccinated, despite millions of dollars spent to advertise the drug and to lobby state governments to require girls to receive the vaccine.

Recent research conducted by Assistant Professor of Marketing Michelle Steward suggests that Gardasil’s manufacturer, Merck, may be taking the wrong approach to market the drug to young women.

Steward and several colleagues from other universities surveyed women ages 18 to 30 to test their reactions to three methods of promoting the vaccine. They were shown advertisements explaining the benefits of vaccination; or told about government mandates, such as a Texas law — eventually overturned — which required all girls to be vaccinated before they entered sixth grade; or asked to complete a survey that heightened awareness of HPV and prevention.

The results showed that the survey was more effective than advertising or government mandates to persuade women to consider taking the vaccine.

“Greater willingness to become vaccinated resulted from consumers who completed a survey on their perceptions of susceptibility to cervical cancer and beliefs about the HPV vaccination, as opposed to consumers who were told about a law requiring the HPV vaccination or consumers who were exposed to an ad for the vaccination,” said Steward, who joined the faculty in 2004. “The educational cues in the survey are the least coercive and appear to prompt more thinking about the risks of not being vaccinated than laws, which may produce a negative backlash, or advertisements, of which consumers might be skeptical.

The Centers for Disease Control and Prevention recommended in 2006 that girls get the Gardasil vaccine at ages 11 and 12 before they become sexually active, so they have the best chance of avoiding the cervical cancer and genital warts caused by HPV. An FDA panel recommended last week that the FDA approve a new drug, Cervarix, made by GlaxoSmithKline, that would compete against Gardasil. Separately, the FDA panel also approved Merck’s application to expand Gardasil’s use to males to prevent genital warts.

But sales of Gardasil declined by a third this year, despite the millions of dollars spent on advertising and lobbying for government mandates. “The results would suggest that Merck’s money may be best spent engaging people through a survey on relevant health topics to get the consumer to think about their own risks,” Steward said. “There’s nothing to suggest that there would be any difference in males’ reactions. If Merck gains FDA approval to market Gardasil for young males, the advantages of surveys versus mandates or advertising would remain the same.

“The study results suggest that pharmaceutical manufacturers who spend large sums on advertising or lobbying efforts could achieve better results at lower costs. Drug companies spend millions upon millions of dollars each year on research and development. Determining how best to move consumers from hearing about a drug or vaccination to actually using the product should rival R&D in importance to a firm,” Steward said.

The study, “The Influence of Different Types of Cues-to-Action on Vaccination Behavior: An Exploratory Study,” will be published in the spring edition of the Journal of Marketing Theory and Practice.