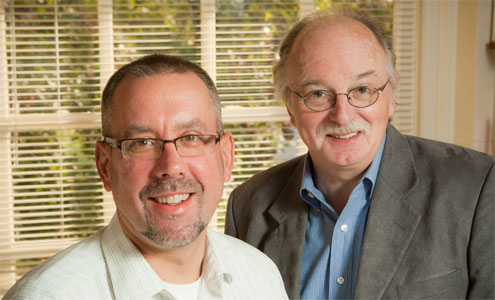 Once the effort to reform health care is settled, immigration reform will likely be the next contentious issue preoccupying Washington D.C. A new book edited by two Wake Forest professors, Getting Immigration Right: What Every American Needs to Know, helps make sense of the immigration issue in America.

Covering the history of immigration here and abroad, the scale of current trends, the economic and political consequences of undocumented immigration, and the social and moral issues currently before us, Getting Immigration Right brings together in one place the various policy alternatives now swirling around the immigration issue, and the data needed to evaluate them.

Edited by David Coates, Worrell Professor of Anglo-American Studies, and Peter Siavelis, the Z. Smith Reynolds Foundation Fellow and Associate Professor of Political Science, Getting Immigration Right is an outgrowth of the “Immigration: Recasting the Debate” conference held as part of the 2007 Voices of Our Time speaker series. Panelists from that conference later contributed essays to the book on topics current to the upcoming immigration debate.

The landscape has changed since immigration hit the high-water mark in 2007, says Coates, who outlines four recent developments:

“In April, the AFL-CIO came out in favor of comprehensive immigration reform,” says Coates, who calls this the most notable political development on immigration in the past six months. “Unions are beginning to argue that it is not immigrants, but unscrupulous employers, who are dragging down wages and benefits for workers. Creating a route to citizenship for undocumented workers, they now believe, will not only improve the lives of low paid immigrants. It will also help protect the wages and working conditions of other American workers.”

Siavelis says it’s important to bring immigrants out from the shadows. “This is no longer about the border wall but about how we will live with immigrants in our communities,” he says. “There are more than 11 million illegal immigrants in this country. We can’t simply send them back, their numbers are too large. But if we isolate them from society, without access to jobs or education, then crime becomes their only option.”

Coates and Siavelis will present a book launch and signing for Getting Immigration Right: What Every American Needs to Know on Oct. 6 at 4 p.m. in the Allen Mandelbaum Reading Room on the fourth floor in the Z. Smith Reynolds Library. Copies of the book will be available for purchase and signing.