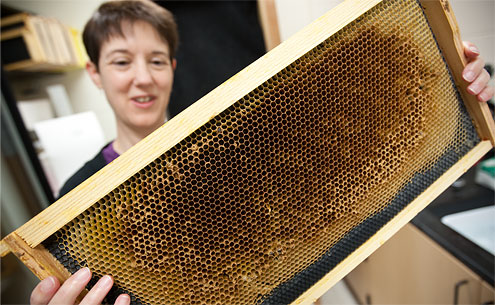 Shoppers are likely to see record prices for local honey this winter — if they can find it. Behind the rising prices are a combination of seasonal factors and long-term trends that have beekeepers, farmers and scientists worried.

“It’s like we’re getting a little message from the future as to how humans are impacting ecosystems,” says Susan Fahrbach, Reynolds Professor of Developmental Neuroscience, who has been studying bees for two decades. “This has been a surprisingly tough year for bees, and we are seeing that through impaired honey production.”

Regional honey prices are already about 15 percent higher than last year, according to Bee Culture magazine. Prices for imported honey from four leading suppliers — Canada, Mexico, Argentina and China – also have jumped over the past two years, according to the U.S. Department of Agriculture’s National Honey Board.

Locally, the rainy spring weather in North Carolina hindered bees from foraging, and the dry summer reduced water sources bees need to make honey. “This is a local episode, but it is superimposed on top of these terrifying long-term trends,” Fahrbach says. “We’re in an overall global decline that is not unique to North Carolina or the United States.”

In a survey, Bee Culture found that beekeepers in North Carolina, South Carolina, Tennessee, Virginia, West Virginia and Kentucky all mentioned spring weather as a problem this year. Still, weather was only their second biggest problem — a parasitic mite topped the list.

Domestic sources supply only about a quarter of the demand for honey in the United States. Threats to bee populations worldwide include pesticides, parasites, viruses, loss of habitat and invasive species like the small hive beetle, an unwelcome honey-eater from Africa. The term “colony collapse disorder” entered the beekeepers’ lexicon in 2006, after beekeepers in varied locations began to compare notes and realized the problems they were seeing with their hives were not localized but occurring worldwide.

Fahrbach maintains a number of hives near campus to supply her research needs. Being a good bee researcher requires being a good beekeeper. Like other beekeepers, she keeps up with trends by talking to fellow members of beekeepers associations and by reading trade journals.

She has to look only as far as her research lab to see the shortage of honey. By this time most years, she has stockpiled in her laboratory freezers enough honey produced by her own bees to feed tens of thousands of bees through the winter. But this year, the freezers are empty, so Fahrbach and her research team, including six undergraduates, will be mixing sugar and water into thick syrup to keep their research subjects alive.

While researchers are inconvenienced by having to feed sugar syrup to their bees, when honey producers have to feed their bees through the winter, it cuts into already slim profit margins and signals shortages ahead. Under normal conditions, beekeepers expect at least 80 percent of their colonies to make it though winter. Under conditions like this year’s, Fahrbach expects only 30 percent to 40 percent of her bees to survive the winter. “Winter mortality is the first sign of stress” in bee colonies, she notes.

Fahrbach has devoted most of her research to neuroscience, examining the workings of bee brains, and to helping decode the bee genome, but recently she turned her attention to the insect’s gut. Looking at stem cells in their guts could shed light on bee health related to environmental factors such as diet and diseases.

She and collaborator Olav Rueppell at the University of North Carolina at Greensboro hope to develop a simple test kit that beekeepers can use themselves to assess the health of their hives and detect problems earlier. They received funding this summer from The N.C. Biotechnology Center to begin their investigation.

Bees are important pollinators and occupy a longstanding place in American agriculture, as shown by the fact that 16 states, including North Carolina, have named the European honey bee their official state insect.