The human cost of war 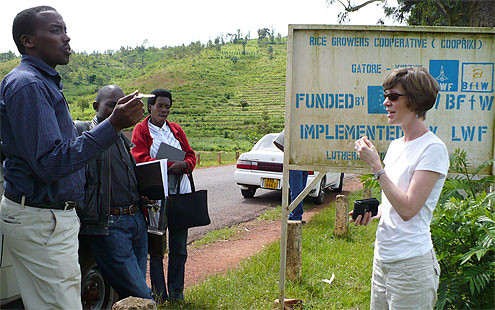 Pakistani civilians flee South Waziristan in the face of an escalating guerilla war. A suicide bomber targets a food-aid group. President Obama contemplates sending more troops to Afghanistan. Assistant Professor of Political Science Sarah Lischer, who joined the faculty in 2005, follows worldwide developments like these in her study of refugees and humanitarian aid. She recently returned from Rwanda, where she studied the return of nearly two million refugees following the 1994 genocide there.

What is the refugee situation worldwide? Has the number of refugees increased?

The number of refugees — people who have crossed an international border seeking safety — has decreased in the last ten years to a current number of about 13 million. However, the number of people displaced by war within their own countries has increased to nearly 15 million people. These internally displaced people, such as the 2.6 million Iraqis within Iraq, lack international protection and receive little humanitarian assistance.

Where are the refugee ‘hot spots’ in the world?

The intractable conflicts in Africa and the Middle East account for a disproportionate share of global displaced populations. In addition to the Afghanistan/Pakistan region, the conflicts generating the most forced displacement include Iraq, Sudan, Gaza/West Bank, the Democratic Republic of Congo and Somalia. It should be noted that around five million Afghans have returned to their country since 2002, although their living conditions are still quite precarious. Despite that massive return, there are still nearly three million Afghan refugees in neighboring countries.

Why would a suicide bomber target the World Food Programme in Pakistan?

The recent suicide attack on the World Food Programme (WFP), which killed five United Nations employees, is only one of many deadly attacks against humanitarian workers in the region. The ongoing war in Afghanistan, and its spread to Pakistan, has undermined the neutrality of humanitarian organizations, like UN aid agencies and private non-governmental charities.

The Taliban, al-Qaeda and Pakastani militant groups view aid workers as enemies, blatantly disregarding the traditional neutrality enjoyed by humanitarians. Acts like the WFP attack further the Taliban/al-Qaeda strategy of destabilization. They view feeding and helping refugees as a hostile act because it helps the reconstruction effort and increases the legitimacy of the government (and the interveners).

The Taliban also hopes to force the withdrawal of international aid organizations, which would eliminate witnesses to human rights abuses committed by the insurgents. Many organizations have withdrawn or curtailed operations following murders of their staff.

What effect would a “surge” strategy in Afghanistan have on the population?

A surge that enabled the NATO forces and Afghan government to regain lost ground and stabilize the country would improve the refugee situation in the long term. In the interim, the increased fighting and inevitable civilian deaths might create more displacement such as that which occurred during the Pakistan offensive earlier this year, when hundreds of thousands of civilians fled their homes. Hopefully, such displacement in Afghanistan would be short-term, and humanitarian assistance would be in place to help. If not, desperate refugees might be willing to support the Taliban in exchange for assistance.

Would the potential resurgence of the Taliban following a U.S. withdrawal increase or lessen the refugee population?

A resurgence of the Taliban might not increase displacement, but would certainly entail human rights abuses and humanitarian suffering. Traumatized and desperate Afghans under a Taliban regime might have so few options for relocating, given that Pakistan and Iran would likely push refugees back across the border, that they would just stay put and suffer.

It is also likely that the 2.8 million Afghan refugees currently in neighboring states would resist returning to a Taliban-controlled Afghanistan. Just as occurred in the 1990s, aid organizations would likely face restrictions on their activity under a Taliban controlled Afghanistan. For example, they would be prohibited from educating girls or employing women.

What are some of the risks and challenges facing large groups of refugees?

The primary challenge for refugees and internally displaced people is basic survival. These people desperately need food, shelter, health care and education. The UN humanitarian appeals for these crises are woefully underfunded by Western donors. The lack of protection and basic survival needs can create security risks among large groups of refugees.

Militants easily enter unprotected camps and abduct children to serve as child soldiers. Women are raped when they venture outside the camps to gather firewood. The refugees’ desperation also makes them more receptive to appeals by militant groups who offer promises of assistance. When combatants shelter in or near camps, government forces may conduct air strikes or other military maneuvers that endanger the civilian camp residents. The longer refugee groups remain in exile, the more likely that they become involved in dangerous political activity. Indeed, the Taliban movement developed during the long exile in Pakistan during the Soviet occupation of Afghanistan in the 1980’s, funded, in part, by covert U.S. military aid.

What are you currently working on?

My current research focuses on the return of previously militarized refugees to their country of origin and is funded by the International Peace Research Institute, Oslo. I recently traveled to Rwanda where I conducted interviews regarding the political effects of the return of nearly two million refugees following the 1994 genocide. My newest project explores the causes of human rights atrocities, such as genocide, mass killings and crimes against humanity.