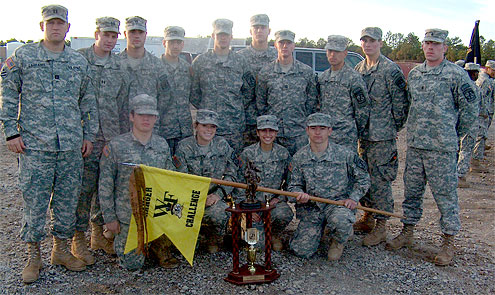 Colleges nationwide are reporting an increase in the number of students enrolling in ROTC programs. Lieutenant Colonel Keith Brace, a graduate of the Citadel and an 18-year Army veteran who was injured by an IED while on patrol in Baghdad, is in charge of the Wake Forest Army ROTC program.

Q. Has enrollment increased in the ROTC program at Wake Forest?

A. Yes, our numbers have increased significantly this year from 45 to 80 participating cadets. Our freshman class is our largest class with 29 cadets. This includes our Wake Forest cadets as well as the cadets from our two partnership programs at Winston-Salem State University and Salem College.

Q. Why do you think the numbers are up?

A. I think the increase can be attributed to the economy, but also an increased awareness of the ROTC program and the great benefits it provides: leadership skills, service to country and job security.

Q. What things do ROTC cadets do outside their classes?

A. During the school year, our cadets participate in physical training three times a week (Mondays and Wednesdays from 6:30-7:30 a.m., and Thursdays from 6-7 a.m.). We also have leadership labs on Thursdays from 3-6 p.m. These labs allow the cadets to take what they have learned in the classroom and put it to use in a field environment.

For example, they train on Land Navigation, Tactical Movement and small unit patrolling. Also, each semester includes a three-day Field Training Exercise (FTX) to a military facility. This semester the FTX was at Ft. Jackson and included Day and Night Land Navigation, a live-fire qualification range with M16 rifles, a Leader Development Course and Rappelling. Next semester we will be training at Ft. Bragg, N.C., and Ft. Pickett, Va.

There are also numerous training opportunities during the summer. This training includes regular Army schools such as Airborne and Air Assault Schools, an internship known as Cadet Troop Leadership Training with an active Army unit, or Cultural and Language Internships.

Q. You frequently see cadets in full uniform and packs around campus — what are they doing?

A. Our cadets wear the Army Combat Uniform (ACUs) all day on Thursday, if we have Leadership Labs. During the execution of the lab they will also have on their field equipment and may be carrying fake M16 Rifles made of rubber. (We call them rubber ducks).

Q. What initial commitment do students make when they sign on as ROTC cadets?

A. There is no initial commitment for freshman and sophomores that want to try out the “basic” course. They can take the first two years of classes and training, gain valuable leadership skills, and then walk away without any commitment to serve in the military. The only exception to this is if the cadet accepts an Army ROTC scholarship. Scholarship cadets are obligated as soon as they sign their scholarship contract.

If they decide to continue in the program, they move into the “advanced” course for their junior and senior years. The advanced course does require a commitment and a signed contract. This commits the cadet to serve eight years as an Army Officer upon graduation. This obligation can be fulfilled on Active Duty, in the National Guard or Reserves, or a combination of both.

Q. How does the new program with NC A&T’s Air Force ROTC work?

A. The Army isn’t for everyone. A student that wants to serve their country, but not in the Army, now has another option. NC A&T has an Air Force ROTC option that is now available to Wake Forest students. The programs are very similar and both result in the student being commissioned as a military officer. Each program focuses on Leadership Training, but there are significant differences in the specific skills required for the different military branches.

Wake Forest students interested in a career in the Air Force can register for Air Force ROTC classes that are taught at the NC A&T campus. This does require the student to travel off campus to participate, but if the participation grows, there may be classes taught on the Wake Forest campus. We need quality officers in both our Army and Air Force, and Wake Forest alumni have a proud history of military service. If you are interested in either program, you can get more information in the Military Science Department.

A. We have alumni serving in all areas of the Active Army, National Guard and Reserves. Many are or have been deployed to the current conflicts in Iraq and Afghanistan, and have represented their alma mater with pride and distinction.