A place where arts and culture flourish 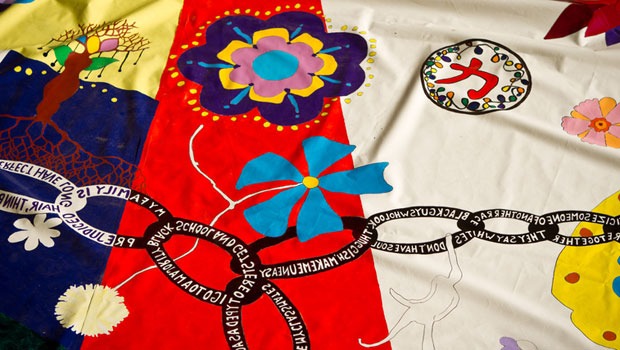 From art exhibitions to dance-offs to film festivals to theatre productions, Wake Forest faculty and students are exercising their talents throughout the school year. Here are some highlights from 2011-2012.

Talking about race can be challenging. Art professor David Finn, with the help of both Wake Forest and local high school students, created the ‘Big Tent’ — a public art project where people can learn to celebrate their differences. Learn more about the project on YouTube, and follow the Transforming Race project on Facebook.

Students in John Pickel’s photography class learned the unforgiving nature of traditional photographic methods as they spent the semester taking black and white photos with pinhole cameras. Their work was featured during an exhibition at the student art gallery (START) entitled “All Wet: Selections from Darkroom Photography.”

Chemistry major Tara Seymour (’12) never imagined she would be dancing out the process of DNA replication until the opportunity arose to participate in Movement and the Molecular, a class where chemistry meets dance.

For choreographer and visiting artist Liz Lerman, questions drive her way of thinking. The trails she and her company, the Dance Exchange, have blazed over the past 30 years have transected genetics labs, shipyards and the large Hadron collider.

The producer and director of photography on the Oscar-nominated documentary “Hoop Dreams,” Peter Gilbert, accepted a three-year appointment with the Documentary Film Program teaching both graduate and undergraduate courses.

“The Last Flight of Petr Ginz,” a Wake Forest documentary film program movie, caught the attention of the United Nations, which produced a study guide for the film and sent copies of the movie to its information centers in 63 countries for special screenings and educational programs.

As a child, Wake Forest student Jawad Wahabzada spent four years working eight hours a day as a child laborer in Afghanistan. He now lives 7,000 miles from his birth country, but he is telling the story about the “Children of Kabul.” Documentary film program graduate Jon Bougher joined Whabazada on the project, which received recognition from CNN iReport and CNN Backstory.

The student-run Reynolda Film Festival 2012, a free week-long series of film screenings and workshops featured a keynote address by Morgan Spurlock, the director of “Super Size Me.”

Eleven vocalists, seven woodwind players, five pianists and four string players competed in the 35th Annual Giles-Harris Competitions in Musical Performance. Jacob Eichhorn, who competed for the fourth time in his Wake Forest career, talks about what it takes to win.

The Wake Forest music department offered concerts and recitals throughout the academic year. Jazzy tunes, electronic sounds mixed with romantic violin, piano, soprano and double bass were on the schedule. Listen to some samples.

What made the University’s theatre production of John Cariani’s “Almost, Maine” surprising? Of the 23 roles available, 11 of them were filled by first-year students.

Wes Hughes and Jake Meyer have been friends since their first year in Bostwick Residence Hall. “City of Angels” is the fifth major production the two have acted in together. On stage and behind the scenes theatre at Wake Forest is about a community of friends.

Lauren Gunderson’s play, “Emilie: The Marquise Du Châtelet Defends Her Life Tonight,” served as the center of gravity for a bright constellation of interdisciplinary campus events illuminating the dynamic relationships between the arts and sciences.