On stage and behind the scenes 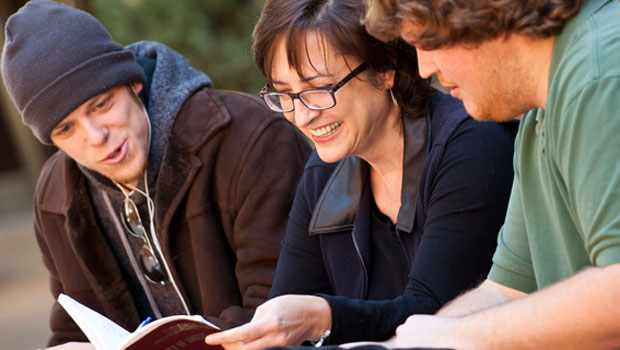 “City of Angels” is a film noir musical with two stories being acted simultaneously. In late 1940s Hollywood, Stine is a novelist adapting his book into a screenplay and egotistical producer-director, Buddy Fidler, is continually demanding rewrites. Meanwhile, in the black and white world of film, the movie is unfolding.

Senior theatre majors Jake Meyer and Wes Hughes portray Stine and Buddy respectively. This is their fifth time together in a major theatre production at Wake Forest — including leading roles in Steve Martin’s, “The Underpants,” as first-year students.

In 2008, Hughes and Meyer moved into Bostwick Hall and got to know each other in the S.P.A.R.C. pre-orientation program, discovering they both had a penchant for acting.

During their four years at Wake Forest they have auditioned together, been cast together and spent many hours running lines together. What might have made them competitors instead strengthened their friendship and their interest in their craft.

“We became accountable to each other,” says Hughes. “When one or the other of us got sidetracked, we helped each other refocus.”

The two friends credit the solid relationships they have with the theatre department faculty with fostering their commitment to acting — especially their friendship with professor Cindy Gendrich, who is directing “City of Angels.”

“I don’t tell my students what to do. We are making something together. So inevitably, faculty and students get connected,” says Gendrich. “We push each other to give our best and thank each other for the hand up when we make mistakes.” 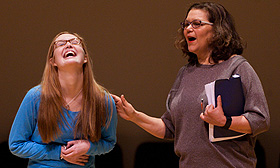 Students with roles in “City of Angels” enjoyed a master class with Broadway veteran Susan Terry. Terry listened to the students perform and provided intensive instruction. The Center for Performance and the Liberal Arts (iPlace) funded the class.

Read more about Terry’s work with the master class »

Some schools still subscribe to the “boot camp” mentality of theatre instruction popular in the 1970s, says Gendrich. “We believe in hard work and commitment but also that people need to have a good time to be free to make good art.”

Hughes says the fun he has had in his theatre classes and performances carries over to his work in other disciplines. And most everything he learns in classes outside of theatre he brings back to his acting.

“Plays aren’t about plays,” says Gendrich. “Plays are about politics, gender issues, history, relationships and a myriad of other topics. Each performer brings to their work on stage what they know and have experienced in other areas of life.”

“When I study for a role, I have to go deeper into the character to find out what’s there under the surface,” says Meyer. “I have learned to do that in all my classes. I’ve learned to appreciate that there is often more to an idea or concept than what I first notice.”

Meyer says exploring Stine’s character has been challenging. “He’s a really smart guy,” he says. “Why does he do such stupid things?”

Because he knows how the the story ends, Meyer says it’s hard not to play the end of the play when his character first steps on stage. “I know that he sacrifices a lot of life’s little things to get what he wants. What I hope the audience notices is that the ‘little’ things in life are often the biggest.”

Jake, who is from Indianapolis, and Wes, who is from Baltimore, have decided to move to Chicago after graduation, where they will continue to support each other in their careers.

Life after graduation in a new city could be much like it was when two 18-year-olds started at Wake Forest. “We’ve changed over the last four years, and we’ll change going forward,” says Hughes. “But we know whatever happens, we’ll have each others’ backs.”