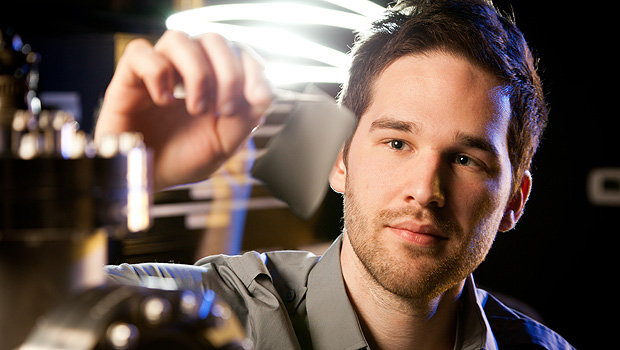 Simply by touching a small piece of Power Felt – a promising new thermoelectric device developed by a team of researchers in the Center for Nanotechnology and Molecular Materials – he has converted his body heat into an electrical current.

Comprised of tiny carbon nanotubes locked up in flexible plastic fibers and made to feel like fabric, Power Felt uses temperature differences – room temperature versus body temperature, for instance – to create a charge.

“We waste a lot of energy in the form of heat. For example, recapturing a car’s energy waste could help improve fuel mileage and power the radio, air conditioning or navigation system,” Hewitt says. “Generally thermoelectrics are an underdeveloped technology for harvesting energy, yet there is so much opportunity.”

The research appears in the current issue of Nano Letters, a leading journal in nanotechnology.

“Imagine it in an emergency kit, wrapped around a flashlight, powering a weather radio, charging a prepaid cell phone,” says David Carroll, director of the Center for Nanotechnology and Molecular Materials and head of the team leading this research. “Literally, just by sitting on your phone, Power Felt could provide relief during power outages or accidents.”

Cost has prevented thermoelectrics from being used more widely in consumer products. Standard thermoelectric devices use a much more efficient compound called bismuth telluride to turn heat into power in products including mobile refrigerators and CPU coolers, but it can cost $1,000 per kilogram. Like silicon, researchers liken its affordability to demand in volume and think someday Power Felt would cost only $1 to add to a cell phone cover.

Currently Hewitt is evaluating several ways to add more nanotube layers and make them even thinner to boost the power output.

Although there’s more work to do before Power Felt is ready for market, he says, “I imagine being able to make a jacket with a completely thermoelectric inside liner that gathers warmth from body heat, while the exterior remains cold from the outside temperature. If the Power Felt is efficient enough, you could potentially power an iPod, which would be great for distance runners. It’s pretty cool to think about, and it’s definitely within reach.”

Currently Wake Forest is in talks with investors to produce Power Felt commercially.

News from the Center for Nanotechnology and Molecular Materials: