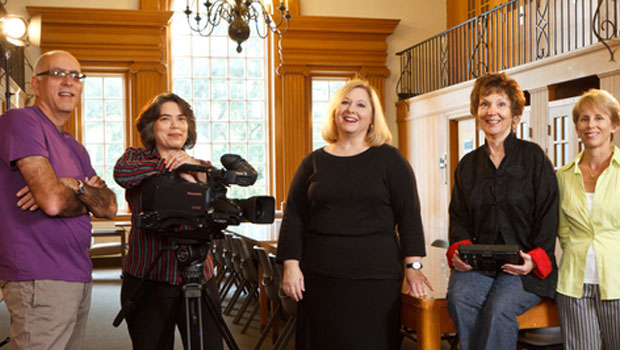 “Students in Wake Forest’s DFP graduate with a film of their own making that showcases their passions and abilities, and that’s why I’m excited to join this team. Not all film programs make this a goal,” says Gilbert.

Gilbert’s expertise includes business and entrepreneurship skills for marketing films, legal know-how on fair use laws and distribution deals, and a thorough understanding of visual storytelling to maximize the dramatic potential of nonfiction narratives, says Mary Dalton, communication professor and co-director of the DFP. “Peter brings all this and more to the program,” she says. “His appointment also allows him to continue making films and that will keep our students at the forefront of trends and developments in the industry.”

How much have times changed? Five years ago editing a feature film with special equipment and trained technicians would have cost $200,000 or more. Today shorter is the new norm. “Young people are savants when it comes to visual literacy. With YouTube, smart phones, tablets and quality video cameras, they know how to use the technology. Fine-tuned technique and exceptional storytelling skills separate the amateur from the professional.”

A dynamic Internet and the proliferation of cable and satellite television channels provide substantive ways for filmmakers to break into the industry, putting work in front of the public that might otherwise have gone unnoticed. Demand for short documentaries and “webisodes” has grown as companies develop content to feed their websites. But the number one lesson for success in the industry, according to Gilbert, is perseverance. “You have to finish your film, good or bad. And if it’s bad, well, we learn most of our greatest lessons from our failures.”

The Documentary Film Program offers students an MA or MFA in documentary production with students and faculty producing award-winning and socially significant films. In addition to teaching graduate courses, Gilbert will join the DFP faculty in film production and will be including students in some of his professional projects. He is also teaching undergraduate courses for students studying in a variety of disciplines.

Read more about Peter Gilbert in the Winston-Salem Journal.