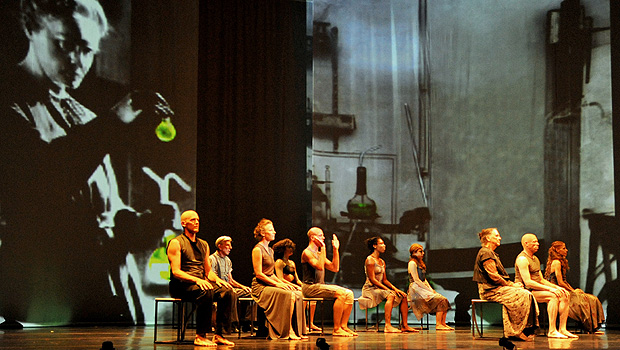 “Choreography is a way of thinking. It is a way of gathering evidence, laying out the pieces, organizing the trail.”

For choreographer and visiting artist Liz Lerman, questions drive her way of thinking – a process that proceeds through questions, to dialogue, to discovery, and, very often, new questions. The trails she, and her company, the Dance Exchange, have blazed over the past 30 years have transected genetics labs, shipyards and the large hadron collider at the European Organization for Nuclear Research. In fact, scientists are increasingly seeking out Lerman’s methods of inquiry and demonstration.

“If you ask a big enough question, you have to engage more than one discipline to answer it,” Lerman told the Wake Forest audience that gathered Wednesday, April 11, for a talk about how creativity can function as a bridge between art and science.

Lerman, who was a recipient of a 2002 MacArthur “Genius Grant” Fellowship, has produced performance pieces that integrate physics and genetics into dance.  She is a leading representative of a growing movement within and outside academe to explore how artistic practices can have broad application in scientific learning and research.  She recently received a National Science Foundation grant to work in partnership with several universities and a group of international researchers in physics and astronomy to produce “The Matter of Origins,” an experimental program that explores the physics of the origin of matter.

Echoing observations and advice that one would have heard at the Rethinking Success conference taking place concurrently, Lerman told her audience, “Creativity is about rattling around in other people’s universes.  It is done through unexpected partnerships, unexpected connections, unexpected juxtapositions.”

“You are in, or are entering, a golden age of cross-disciplinary performance work,” Lerman encouraged dance and drama students at a lunch, Thursday, April 12, at which the choreographer, together with dramatist, Lauren Gunderson, spoke about how as artists they worked with science and responded to questions about living a creative life in a “transdomain” landscape of inquiry.

“We are moving away from what I call the ‘vertical’ world of yes/no, good/bad, right/wrong.  In less or non-hierarchical world many ideas can coexist.  Distinction is important…. But distinction doesn’t have to be about right or wrong. I call this hiking the horizontal.

“On Fueling the Imagination”

I was visiting with my friend, the biologist Bonnie Bassler at Princeton, when she took me down the hall to meet her colleague, Eric Wieschaus, a Nobel laureate who works with fruit flies. By that time my dance Ferocious Beauty: Genome had already premiered and I was eagerly fixing it. I was particularly interested in the part we called the “fugue” because of its complex relationship between video, text, and movement. The subject of this particular section is the myriad ways in which science and artistic research overlap. It starts with the scientist Aaron Terkowitz from the University of Chicago saying, “How do I ask myself a question?” followed by five minutes of dance and media that addresses just that query.

So I asked Dr. Wieshaus how he asks himself a question. And he responded, “I am fueled by my ignorance.”

The precision of his answer thrilled me. “Nobel Laureate Fueled By His Ignorance” would make a great headline, I told him. Artists and scientists have a keen understanding that not knowing is fuel for the imagination rather than fuel for humiliation. There is nothing to hide.

In recent years Lerman has held a number of guest residencies at colleges and universities where she has been working with educators to explore how movement can be used to teach about science.

“Dance and art can be a science delivery system” said Lerman, who gave an example of how artists are helping scientists “see what they are doing” at Johns Hopkins University by embodying scientific concepts and theories.

“Artists and scientists have a lot in common,” said Lerman, who poses the term “creative research” as the counterpart to scientific research.  “Both have a lot of rigor, discipline, both develop methodologies. And artists too have data to interpret.

Artists and scientists are both obsessive and are captivated by the lovely tedium of their work. Both have an interest in inquiry. Both are interested in symbolic language.  Sharing our methods and processes can be very helpful.”

While on campus Lerman taught three dance classes, including a master class for students in  “Movement and the Molecular,” an interdisciplinary course taught by Christina Tsoules Soriano, Assistant Professor of Dance and Rebecca Alexander, Associate Professor of Chemistry.

Lerman also took time to participate in Soriano’s community dance class for people with Parkinson’s Disease, a project that combines research with outreach.

Lerman’s four-day guest residency was sponsored by The Center for Molecular Communication and Signaling, the initiative for Interdisciplinary Performance in the Liberal Arts (IPLACe), The Department of Chemistry, the Provost’s office and the Dean’s office.