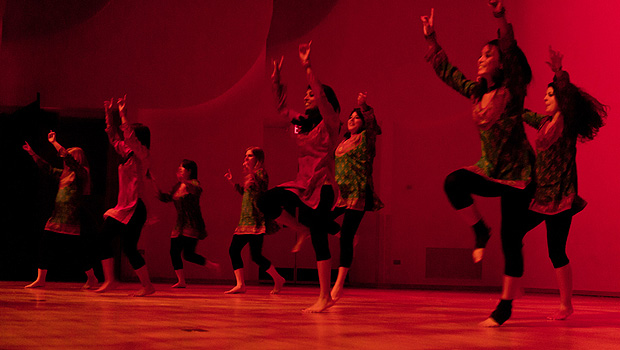 “Maybe instead of acts of discrimination against our neighbors, you will have learned from this event – that it is truly more purposeful to simply dance with them.”
— Yasmin Bendaas, president of WFU’s Chapter of Amnesty International

“We live in a highly globalized world today, and although we are more connected than ever, our links have often proved to create misunderstanding and miscommunication between cultural groups,” she said. “This event took one aspect of culture, dance, as a way to promote cross-cultural understanding.”

Bendaas says that the event met its goal because of the excited feedback she received from high school students on a dance team from Greensboro.

“After their performance they invited members from the audience to learn a few steps,” she said. “Astonished at how many students joined them, they are now considering Wake as a college application choice.”

In addition to building unity among diverse Wake Forest cultures, the dance-off incorporated Wake Forest’s Pro Humanitate motto. All proceeds, generated from a $1 admissions charge and generous donations, went to The Second Harvest Food Bank of Northwest N.C., with the goal of feeding the hungry in and around Winston-Salem.

“The event proved people of all backgrounds can come together for one cause,” Bendaas said. “Hunger does not distinguish between backgrounds.”

Bendaas said she hopes that Amnesty International continues to take on large-scale events that are both purposeful and creative and also believes that they will hold the dance-off in years to come.