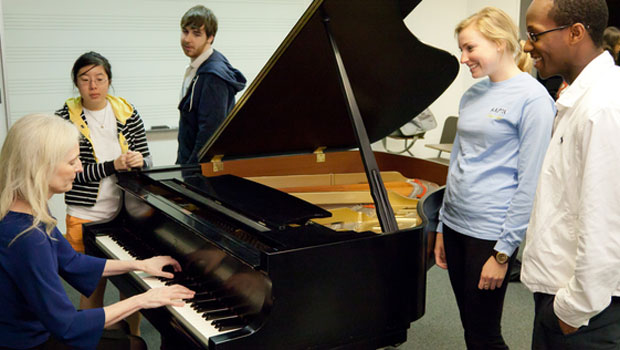 Music pulses through open car windows, provides grocery-cart-pushing inspiration and fills our smartphones and iPods. It is a part of daily life. Beethoven and Brahms, however, are noticeably absent.

“Classical music does not necessarily speak for itself anymore,” says concert pianist and Part-Time Assistant Professor of Music Pamela Howland, “because we don’t always understand the language.”

To help with translation, Howland uses film to reach a very visual culture in hopes “Moonlight Sonata” or “A German Requiem” might find their way to more playlists.

“The point of music is to feel connection and emotion,” Howland says. “Up until recent times, music was a soul-feeding form of personal expression. Today’s audience responds to images, so to open up the ears, I use film.”

“When Storm Troopers appear in ‘Star Wars,’ music plays to announce their arrival. Think of when the shark appears in ‘Jaws.’ The ‘duh da duh da’ sound raises alarm and fear in the audience. We know what’s happening, though the woman diving into the ocean for a swim is clueless.”

Howland explains that this technique, which connects music to a certain character or emotion, is called a leit (pronounced light) motif, and it was invented by the German composer Richard Wagner (pronounced Vagner) in the 1850s. “It’s a 19th century operatic technique that is much easier to understand when we can visualize in our minds the Storm Troopers or the shark.”

“Dr. Howland makes it easy and fun to discover new connections like history and politics through the lives of major composers such as Chopin and Smetana, and the mathematics of musical form in Beethoven,” says senior business and enterprise management major Thomas Murko. “My career as a management consultant will require virtuosity in this way of thinking, and I know I’ll be well-prepared to perform.”

Outside of class, Howland is a fledgling filmmaker herself. Her documentary on Chopin, which sold out for its debut screening at the local 2012 RiverRun International Film Festival, is another way she invites people to embrace classical music.

“It’s a love story. There’s beautiful music. There’s history and travel and medicine — Chopin died very young from tuberculosis,” she says. “There are many points of entry into Chopin’s music, and I’m going to use every one of them to get people interested enough to learn more about his work. It’s my mission to keep classical music alive.”