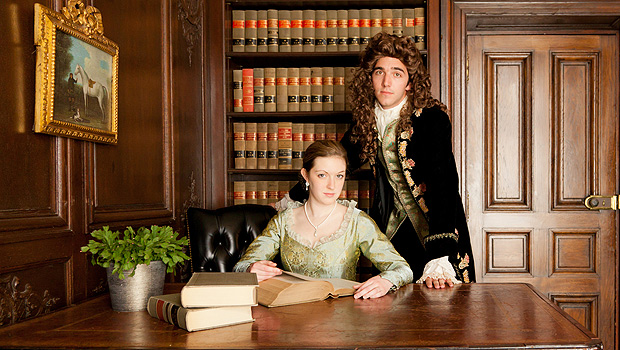 Earlier this month, Lauren Gunderson’s play, “Emilie: The Marquise Du Châtelet Defends Her Life Tonight,” served as the center of gravity for a bright constellation of interdisciplinary campus events illuminating dynamic relationships between the arts and sciences.

The play’s brilliant protagonist, Emilie, the Marquise du Chatelet (1706-1749), was a mathematician, physicist, philosopher and linguist. Her translation of Isaac Newton’s Principia remains the authoritative French translation of Newton’s work.

Emilie was also colleague and lover to the Enlightenment playwright and philosopher Voltaire.

With the consent of her husband, Emilie and Voltaire established themselves in a country chateau to pursue research and writing, aided by one of the largest libraries in Europe (21,000 volumes) and a cutting-edge court theater. This is the setting for the Gunderson’s play, directed by Sharon Andrews and performed by an outstanding student cast.

“If you ask a big enough question, you have to engage more than one discipline to answer it,” Lerman told the audience that gathered Wednesday, April 11, for a talk about how creativity can function as a bridge between art and science.

If we live in now in an interdisciplinary age, Emilie and Voltaire lived in an age that was still largely pre-disciplinary. The lines demarcating academic disciplines were not so fixed as they would soon become in universities. The impulse to classify and distinguish fields of knowledge – art, math, literature, physics, philosophy, chemistry – gained momentum from the Enlightenment, but boundaries were still fluid and contested in the world of the Gunderson’s play.

Consequently, the intellectual projects of Emilie and Voltaire ranged widely, interrogating from many angles the nature of the universe and the meaning of human existence. Gunderson’s strives to take full advantage of this particular historical moment, crafting a protagonist who with wit and intensity probes and plays with complex, and often contradictory, ideas. Senior Mackenzie Finnegan gave a virtuoso performance as a prolix, insatiable, and yet disciplined Emilie.

On Friday, April 13, an interdisciplinary panel of WFU faculty, whose work focuses on the 18th century, brought the “World of the Play” into sharper focus with a presentation at the MainStage Theatre. The panelists include members of the “Science and the Arts in the 18th Century” faculty seminar, sponsored by the Humanities Institute. Playwright Lauren Gunderson also participated.

While her own, well-educated and aristocratic mind enjoyed a certain degree of freedom, Emilie was keenly aware of the constraints of gender.  “I feel the full weight of the prejudice which so universally excludes us from the sciences. [I]t is one of the contradictions in life that has always amazed me…” she wrote in the preface to one of her translations.

“I would have women participate in all human rights, especially those of the mind.”

The history of women in science and the experience of women today who strive for parity with men in scientific fields — and in professions that require outstanding accomplishments during childbearing years – are subjects inherent in the play.  Emilie, the Marquise, only began her research and writing after bearing three children and then consigning them to others to educate.  An unintended pregnancy resulted in her death in childbirth at the age of 42.

After the final curtain came down on Saturday evening, the questions raised by Emilie were raised again for discussion when faculty from the Reynolda Campus and School of Medicine created a forum to discuss the experiences of women in the field of science. Panelists included Simone Caron (history, moderator), Caryl Guth (medicine), Rebecca Alexander (chemistry) and Oana Jurchescu (physics).

“The key insight,” said Cindy Gendrich, director of the Interdisciplinary Performance and Liberal Arts Center, “was that things really have gotten better for women in scientific professions — but that perhaps they didn’t change as much as we would have liked from Emilie’s time up until the late 1960s. … In science, statistically, men still outnumber women significantly.”

This forum, together with a number of other events coordinated around Emilie, many of which included the active presence of Gunderson, was sponsored by the initiative for Interdisciplinary Performance in the Liberal Arts (IPLace).