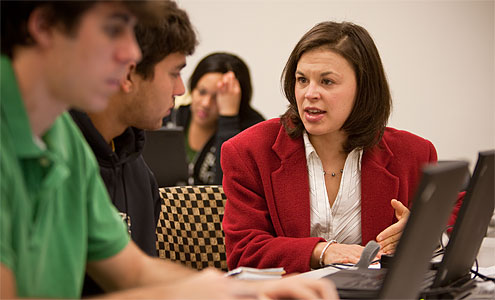 This fall, Rebecca Matteo, a lecturer in sociology, taught a first-year seminar on health-care reform, “A Sociological View of America’s ‘Non-System.’” From preventive health to cost containment, the class explored the fragmented landscape of health-care reform from the sociological perspective. Matteo studies health policy and has conducted research on military health care, the health care needs of the elderly and poor, and links between community resources and health care service availability.

What were the goals of the class?

Health-care reform, at this particular time, is a wonderful focus for a first-year seminar, but also very relevant to sociology more generally. Media resources abound related to health-care reform; and, I feel it is important for students (or any American) to learn about both the substance and process of policy development to make informed decisions.

Part of the course includes learning about “reliable” sources — being able to recognize bias and to be confident in their ability to comprehend a complex issue through data and theory. This is why the sociological perspective is a great lens through which we can analyze health care reform. I expose the class to various disciplines (public health, economics, political science, etc.), but we focus on the tenets of sociological thinking and analysis. We also consider international comparisons in order to understand what has worked (or failed) elsewhere, and why those systems may not be applicable in the United States. Comparison is a wonderful tool for developing strong arguments.

It is important to me, as a sociologist, that my students see “current events” in the focus of my discipline. Knowing that what they see on television or in the news is something we can discuss and analyze during the seminar keeps them engaged in critical thinking, both in and out of the classroom.

What are the most important issues in health-care reform today?

As I tell my students, I think one of the biggest “issues” in health-care reform is the lack of understanding we have about the “health-care system” itself. I am excited to hear my students talk about conversations they have with family and friends outside of class related to health-care reform. Their eyes are open … and they feel confident to have an opinion that they can both articulate and defend.

What I believe is that our system is not truly a “system.” We currently lack centralization, regulation, communication and organization in the way health care is provided, which is not to say that a socialized system is necessary. But, there are so many gaps in our current fragmented medical complex that the “where to begin” question is overwhelming. I am reminded of this at the start of the semester, when I realize that there are never enough weeks in the semester to consider every relevant topic.

In terms of health-care reform in general, I believe that our “non-system” is in need of major change. Compromise is inherent in sweeping policy, but I do agree with the specific focus of removing pre-existing condition clauses from insurance plans, and greater coverage of Americans in general, without losing options (or choice) in coverage. Furthermore, continuity of care is something I personally believe will improve our system, but this requires access and availability of both insurance and general practitioners (potentially facilitated through electronic medical records).

In an era marked with the proliferation of chronic disease management and increasingly expensive, yet beneficial, health technology, there must be an effort to support preventive health, both through individual and system-level changes, rather than continued “reactive” and “defensive” medicine, which ultimately lead to wasted time and money.

Within the long history of attempts to provide major reform to the health care system in the United States, President Obama has forced conversation to an unprecedented level. Creating a dialogue and making decisions transparent are critical ways to help alleviate fears of government control that are pervasive in our society. Sadly, as medicine developed into “big business,” market ideals became entangled with the altruism of the profession. We all suffer for that trend — as the collective interests of health care are now intertwined in a web of fear about life-threatening chronic illness, medical bills, losing insurance, malpractice — on and on.

What we do know is that Americans are very diverse in both their opinions about what is best for the health-care system and their own individual health care needs. Whether reform is based upon cost containment, health outcomes assessments, or the satisfaction of patients and health-care workers, what we need most is a level of security and consistency for health care providers and their patients.

Matteo posed the following question to the students in her “Health Care Reform” class:

As a college student, why should you be concerned about health care reform?

It is just another sign of Wake Forest’s commitment to mold critically-thinking students that we are able to take a class that directly addresses and critiques political reform currently taking place. By learning about health-care reform through a sociological perspective we are learning how to analyze political theory through different viewpoints and question the pros and cons of President Obama’s reform plan. We will be responsible for our own health care coverage very soon, and Wake Forest is giving us the opportunity to decipher the complicated health care system armed with a breadth of knowledge.

For me, understanding and learning about health-care reform is crucial now because I’m preparing to enter the real world. In a few short years I will no longer be under the coverage of my parent’s insurance which means what’s happening now will affect me sooner than I’d like to believe. Being active in the health-care reform debate now can only benefit us; without voicing our opinions we will be living under a reformed system decided upon by the pharmaceutical industry and other big business groups who fund our politicians. As a pre-med student, not only is my health insurance being debated but also my future job description and role in society.

Health-care reform is very important for college students. Soon after graduation at the young age of 25, young adults are no longer covered by their parents’ insurance plans. After paying for college, graduates want comprehensive care at a fair price. They also do not want to be burdened with debts in the future because of ill-advised reforms made today. The U.S. is currently the closest it has been to health-care reform. The bills on the floor are being debated by Republicans and Democrats who have vastly different views on how to reduce costs while extending coverage to more Americans. I personally feel that there are cheaper, free-market solutions to the healthcare “crisis,” but seeing as the government-sponsored public option has large support in Congress, it will be interesting to see how it turns out.

Some of the most important topics from last year’s presidential election were the economy, the war in Iraq, and health care reform. America has some of the most advanced medical care available, yet we spend the most per capita on health care in the world. One of President Obama’s platforms for the election was a complete overhaul of the health-care system, and I was curious as to how his reform would affect me as a college student. This class was important because I wanted to understand how the new health-care system will work because in a matter of a few years, I will be an active buyer in health insurance. In addition to this, as a pre-med student, I would like to become familiar with the system which I will be working with for the rest of my life.

I am an international student from India. I have been living in the United States for the past four years. I have had to make a few visits to the doctor and the first thing that struck me was the exorbitant cost of the service and medicines. I believe that reform should be made in this field. I feel that studying this I have learned that this is a very complex problem that requires solving and reforming multiple levels. I also believe that this goes deeper than reforming the healthcare system, but the insurance, technologies and education systems as well. A reform will benefit the nation as a whole for generations and the first step is now.

Our country’s health-care system been labeled everything from the “best system in the world” to the most wasteful and inefficient portion of American expenses. As a student, I have been able to challenge these generalities and formulate my own opinions concerning the healthcare reform that needs to be addressed. This reform is important to me as a pre-med student and future tax-paying American citizen because my future is at stake. The people I will treat, the insurance I will buy, the medical benefits and compensation for malpractice lawsuits, the taxes that I will pay, and most importantly healthcare offered to those around me that I love will all be determined by the reform that is passed (or not). I feel a certain connection to the debate on health-care because my future is ultimately shaped by the decisions made in Congress.

As not only someone who will later use our nation’s healthcare system, but also as a proud American I feel that our nation’s health-care system should be second to none; however, as I look around the world I see that may not be the case. Capitalist democracies just like our own spend far less on health care and have much more to show for it. Therefore, my goal in this class has been to examine what other countries do well and apply those principles to our own systems. An old addage says that, “‘A chain is only as strong as its weakest link'” and I believe that an extensive review of other systems will allow us make our nation stronger and more secure for my generation.