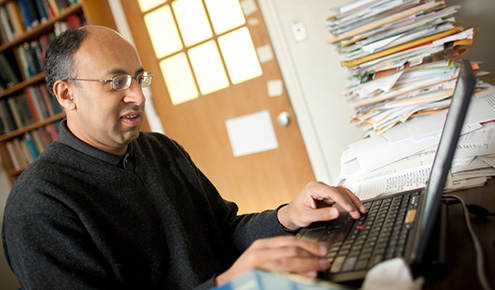 Since the theory of quantum electrodynamics was founded in the late 1920s, only a handful of researchers in theoretical and computational chemistry have been working to determine how light interacts with electrons in atomic and molecular systems—those invisible bits of matter that make up everything. One of them is Associate Professor of Chemistry Akbar Salam, whose recently published book gives scientists new ideas and methods for calculating forces between molecules.

“I wanted to offer new ways to apply the theory of quantum mechanics,” says Salam, the Ollen R. Nalley Faculty Fellow. “Studying quantum electrodynamics adds to developments in other fields, such as nanotechnology, but the equations also give fundamental physical meaning and insight into elementary processes occurring in nature. I had a passion to publish these relatively new ideas on molecular interactions so that others could use them for their own work.”

One of his former students, Bridget Alligood (’06), currently a graduate student at the University of Chicago, worked with him on the illustrations for the book and provided comments on the first chapter.

Salam joined the faculty in 2003. He has been the 21st Century Center of Excellence Guest Professor at Kyoto University, Japan, and a visiting fellow at the Harvard-Smithsonian Center for Astrophysics in Cambridge, Mass. He is a recipient of University College London’s Harry Poole Prize in Physical Chemistry and the 2005 Wiley International Journal of Quantum Chemistry Young Investigator Award.