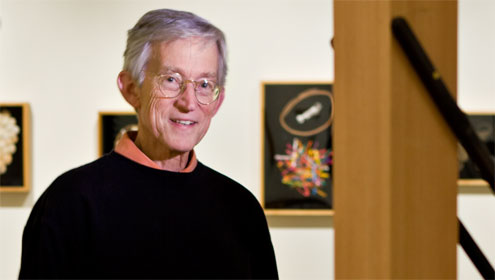 Professor Emeritus of Art Robert Knott, who led Wake Forest’s art department through its formative years and was a guiding inspiration for the Student Union Collection of Contemporary Art, died Feb. 18 in Winston-Salem following an illness. He was 68.

Knott is survived by his wife, Elen, who is retired from the Z. Smith Reynolds Library, and two daughters and four granddaughters. A gathering of family and friends will be held Sat., Feb. 20, from 2 – 4 p.m. at Salem Funeral and Cremations, 120 S. Main Street in Winston-Salem.

“He was a man of many talents, certainly in art history, but also as an artist and as a master teacher,” said Margaret Supplee Smith, Harold W. Tribble Professor of Art. “He set the model for building a collaborative and cordial (art) department and for pushing Wake Forest to interface with the art world and contemporary art.”

Smith had known Knott since the two taught together at the University of Massachusetts-Boston in the early 1970s. Knott joined the Wake Forest faculty in 1975 as one of the first faculty members of the new art department and hired Smith in 1979. He served as chair from 1978 to 1980 and from 1995 to 1997.

“He, along with Peggy Smith, really lay the foundation for the art department as we know it today,” said Provost Emeritus Ed Wilson (’43). “He was such a versatile person as a teacher, artist, art historian and adviser to students.”

Knott was the longtime adviser for the Student Union Collection of Contemporary Art, a diverse collection of paintings, sculpture, photography and multimedia pieces purchased by students during trips to New York City every four years since the 1960s. Knott accompanied the students on four buying trips to New York and taught the required modern art course for the trip.

After he retired in 2008, Knott rented an art studio on North Trade Street in downtown Winston-Salem. “His art work was amazing,” Smith said. “His sculptures sort of looked like Bob: funny, ironic, edgy, beautifully crafted. The retrospective of his work, primarily sculpture, when he retired in 2008 gave us a stunning glimpse of the force and depth of his creativity and imagination.”

A native of Memphis, Tenn., Knott began making art, little carved wooden animals, when he was about 10-years-old. He graduated from Stanford University and earned a master’s degree in art history at the University of Illinois and a doctorate at the University of Pennsylvania in early 20th-century art. A musician as well as an artist, Knott spent one summer in the late 1960s playing the fiddle on tour with folk legend Jim Croce.

He taught 19th and 20th century European and American art and contemporary painting and sculpture at the University of Massachusetts-Boston from 1969 to 1975 before coming to Wake Forest. It was the opportunity to shape Wake Forest’s new art department that convinced him to migrate south, he said in a 2008 interview.

“One of my major concerns when I arrived was that the plan [for expansion of the department] was weighted much more heavily toward history than toward studio. I pushed hard for equal weighting, the result being a much more balanced and thriving department.”

Knott drew much of the creative inspiration for his sculptures from the shoreline of Passamaquoddy Bay in Lubec, Maine, where he and his wife have owned a cottage since the 1970s. There, he gathered pieces of the demise of Maine’s fishing industry — wood planks and posts, lobster tags and bits — that he would later fashion into sculptures.

He was also a skilled photographer who created a unique photographic interpretation of Venice — colorful hanging laundry — when he served as director of Wake Forest’s Casa Artom program in 2002.

Knott was also a great story-teller, Smith said. He particularly enjoyed telling about the first time he met noted art historian Richard Brilliant, who introduced himself as “I’m Brilliant.” To which Knott quickly responded, “I’m Knott.”

Cheryl Walker (’88) and David Fyten contributed to this article.