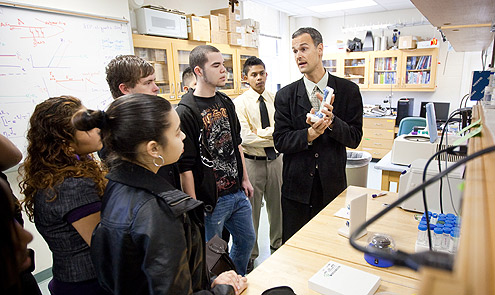 Meet Kenny Twist and the DNA girl. They are the stars of a new animated film, “Cell Side Story,” developed by students at Atkins Academic and Technology High School in cooperation with Wake Forest and other community partners.

“Cell Side Story” is a love story featuring male and female animated characters that dramatize what happens within cells. Kenny Twist represents kinesin, a motor protein found within cells. The DNA girl is DNA, the nucleic acid that tells the cells what to do. The musical video is designed to teach the basics of biotechnology.

“It tells the story of what happens inside a cell,” said Jesus Sandoval, an Atkins senior. “And we’re telling it in a ‘High School Musical’ kind of way to catch kids’ attention.”

The video helps students envision “inner space” in a cell. “Through the magic of computer animation, the audience will fly from the outside of the body into a hair follicle, down into a cell, and land at a location where the students’ chosen molecular machines are performing their functions,” Macosko explained.

Atkins students designed the characters, animated characters using computer technology, helped design background scenes, sang lyrics, translated the lyrics for the Spanish version of the video, and created the artwork that was photographed for the DVD menus.

“This has the potential to be a trend-setting catalyst for how biotechnology is viewed by young people everywhere,” Macosko said. “We hope this leads many of them to consider training for careers in biotechnology, a field with a need for more trained workers. We’re entering a great new age where the cell as a factory will be like when Ford mastered the assembly line.”

The video will be made available to high school students across North Carolina to help teach them how biotechnology harnesses cellular machinery to cure diseases, detect biohazards and manufacture new materials.

Rodney Bass, the principal of computer technology at Atkins, said the project “has been a great partnership.”

Atkins was the ideal partner, Macosko said. They had students with good ideas and great facilities with access to 3-D Studio Max to create animations, he said.

Tevin Withers, a senior at Atkins, designed several characters and animated DNA girl as she reacts to seeing Kenny Twist for the first time. “Seeing the characters coming to life on screen was so cool,” he said.

“I want to be a graphic designer, but I’ve also wanted to do concept art for movies or animations and this is basically doing that right now. Not a lot of teenagers have that type of experience when they’re in high school.” Last summer, Withers had an internship with Dennis Nikolaidis, a professional animator with Animusing Productions who collaborated on the video and mentored the Atkins students.

Macosko developed the project idea through his work advising a group of Wake Forest student entrepreneurs, who, after taking his freshman seminar on biotechnology, formed a company called BioBotz. The company’s goal is to produce education games, cartoons, toys and storybooks aimed at getting children interested in biotechnology. Some of the students from the original Wake Forest BioBotz team helped the Atkins students construct a detailed encyclopedia of the molecules shown in their film.

The initiative is a joint project with local educators, scientists and animators from Wake Forest’s department of physics, the Center for Biomolecular Imaging of Wake Forest University Health Sciences, the Center for Design Innovation, and faculty and students from 3-D animation programs at Winston-Salem State University, the University of North Carolina School of the Arts and Forsyth Tech. It is part of a three-year project, “Visualizing Biotechnology in Four Dimensions: Hands-on Learning in High School,” funded by an Education Enhancement Grant from the North Carolina Biotechnology Center.