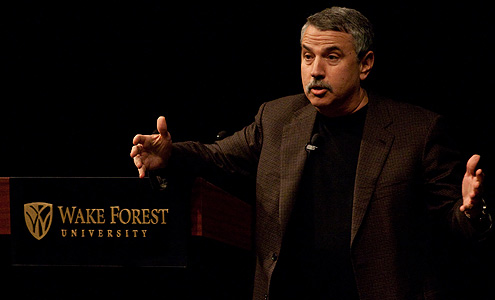 The hour is late, but there is still enough time to launch a true Green Revolution to solve the world’s greatest problems that all trace their causes to energy, said best-selling author and New York Times columnist Thomas Friedman in a speech at Wake Forest Wednesday night.

“The stakes can’t be higher, and the payoff could not be greater, and we have exactly enough time, starting now,” said Friedman, the author of “Hot, Flat and Crowded: Why We Need a Green Revolution — and How It Can Renew America.” His speech, before about 2,200 people in Wait Chapel, was part of the University’s two-day conference on energy and sponsored by the Voices of Our Time lecture series.

It’s time to launch the next great industrial revolution: the ET, or energy technology, revolution, he said, to address a hot and crowded planet with more and more people striving to live like Americans. The world can’t meet the energy demands of more “Americans” in such places as Brazil, India, China and Russia, he said in his hour-long remarks that ranged from the humorous to the sobering.

Other problems include a dwindling supply and increasing demand for natural resources; “petrodictatorships,” regimes supported by oil dollars that restrict freedom; and the 1.6 million people around the world with no access to power.

The loss of biodiversity is turning this generation into the “age of Noah,” he told the students. “We are the asteroid and the dinosaur. Your generation will be the generation that sees the last two of more and more species. We can’t address that later. Later is over.”

Climate change is too great a threat to waste time denying, he said. It’s not global warming that we should be afraid of, but “global weird,” as even small increases in temperatures can cause huge problems. “Even if there’s a 1 percent chance that this could lead to an irreversible and potentially catastrophic outcome, maybe we should buy insurance, especially if that makes us stronger, better and more competitive.”

But despite those problems, he remains optimistic, he said, because of the innovative spirit of the American people. “These are incredible opportunities, masquerading as insolvable problems,” he said. “They all have the exact same solution: abundant, cheap, clean reliable electrons. Whichever country owns the energy technology solutions will have the most security and global respect. That country has to be the United States of America.”

Anyone that thinks we’ve already been having a Green Revolution is wrong, he said. “We’ve been having a green party.” Green isn’t just a lifestyle choice, it’s national power and economic power and innovation. A true revolution will occur when companies have to change or die — recall what happened to companies that didn’t adapt to the technology revolution — and when the word “green” disappears, he said. There won’t be any green buildings or green cars because everything will be built to the highest levels of sustainability.

The revolution will not be easy and will come with a cost, he stressed. Unlike the IT revolution — when people willingly paid for new cell phones and new computers — people won’t pay more for the same lights and the same heat, just because it’s green.

“The energy technology revolution will remain stalled until America’s leaders create an ‘eco-system for innovation’ through laws, rules, standards and price incentives that require change. We need to get our democracy to work the right way, to launch a green revolution.”

That’s why political willpower to bring about change is crucial, he said. “I like to say change your leaders, not your light bulbs.”