WFU professor co-authors study on role of virocells in oceans

Viruses are abundant in the ocean. There’s about a million viruses per teaspoon of seawater. When they infect marine bacteria, a new virocell (virus-infected cell) is created. 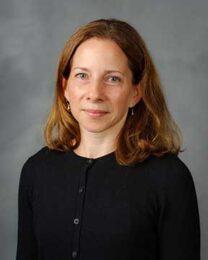 Researchers didn’t know much about how these virocells interacted with other organisms in the ocean, but a new study co-authored by Wake Forest University Assistant Biology Professor Sheri Floge is giving some insight. She partnered with scientists at other institutions, including The Ohio State University and the Lawrence Berkeley National Laboratory to find out more.

“These infected cells can look very similar to an uninfected cell, but they’re very different on the inside,” said Floge.

“The viruses are at work changing and manipulating the host metabolism and what that means is that the cells that are infected are actually taking nutrients up differently. They’re releasing all sorts of different metabolites, which is one of the things we were able to show experimentally in the study.”

Researchers analyzed the physiology of Synechococcus cyanobacteria, which is important to carbon cycling in the ocean. Another important factor in that process is the interactions among the different microbes.

Floge said microbes in the environment are fairly overlooked. “These interactions between these microbes and the surface ocean, they truly are controlling climate.”

“The surface ocean has removed 30% of anthropogenic CO2 to date, much of that through the action of microbes. However, as we continue to warm the oceans, we really don't know if they're going to be able to continue to do that - and it all hinges on the interactions between those microbes. That’s what’s controlling the carbon cycling. ”

Oceans cover about 70% of the Earth’s surface – and according to Floge – they are changing very rapidly. They are becoming warmer and more stratified or layered. If these deep layers aren’t mixing well with others in the ocean, it can affect nutrient and oxygen flow and cause less absorption of carbon dioxide.

She said it’s hard to predict how the oceans will respond to climate change, but this study opens a window to find out more about these complex marine eco-systems.

“You know, we can move beyond just looking at a virus and host and start to think about what happens when you have a virus, a host and a predator, and then keep building that up, so we can better predict how these interactions may change in the face of continued climate forcing.”

This work was supported by the National Science Foundation, Arnold and Mabel Beckman Foundation Postdoctoral Fellowship, the Moore Foundation Investigator Award, and the Office of Science of the U.S. Department of Energy.