Aiming at you: Advertisers hit the mark with targeted messages 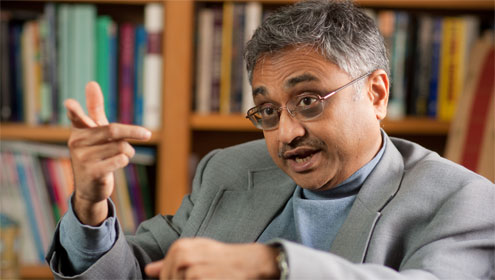 PepsiCo’s decision to launch an online cause-related marketing program rather than advertise during the Super Bowl has generated tremendous interest. The program centers around Pepsi’s pledge to donate millions of dollars to social causes voted on by Pepsi “fans.” Social networking appears to be providing a more cost-effective way to reach a larger audience with greater long-term impact than television. But is it a trend that’s here to stay?

“The television as a commercial medium for advertising is a dinosaur,” says Professor and Chair of Communication Ananda Mitra, an expert in social media. “Individuals can be easily mapped using information through social media sites, such as Facebook. It no longer makes sense to develop homogeneous messages for a broad audience when the person most likely to purchase your product can be pinpointed with accuracy.”

The viral nature of social media unlocks the potential for advertisers to reach hundreds of thousands of individuals and keep them connected and interested in a product. Individuals on Facebook, for example, can connect to a company or product by becoming “fans.” Fan members receive messages and updates from the company, just as they receive updates from a friend or family member. A campaign that includes interactive elements, such as submitting an idea or casting a vote, is an ideal way for a company to dialogue with the customer and build relationships between consumers based on common interests.

Information on a person’s likes or dislikes is relatively easy to uncover. Mitra refers to the personal details — where you live, your age and sex and interests — that users reveal on social media as narrative bits of information, or “narbs.”

“The narbs we put out about ourselves are not difficult to mine. The collection process is invisible to the user but is also provided by the user.”

Information provided by your friends can be helpful to advertisers as well. When you’re “tagged” by a Facebook friend, that photo can reveal additional information about you without your active participation. “If the photo was taken at a restaurant and you’re eating wings and drinking beer, this gives advertisers information about how you spend your money,” he said.

“With the rise in digital media, it’s now possible to advertise to individuals, and it’s less expensive than using traditional generic methods,” Mitra said. “The up side is that people receive information about products they might really be interested in purchasing. The down side is that the system creates tunnel vision — your options are limited for you and by you — without you being aware of it.”