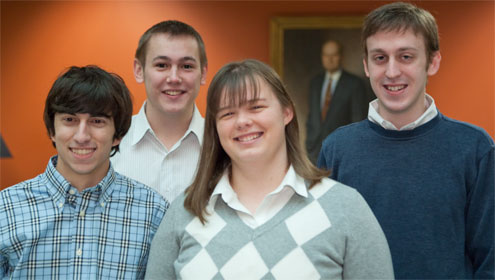 Four undergraduate business students who won the national KPMG Global Case Competition earlier this semester are competing in the international competition in Athens, Greece. They have advanced to the Final Four and will compete against teams from France, Sweden and Germany on April 9.

The team is made up of senior Andrea Kensy of Upper Holland, Pa.; juniors Swayze Smartt of Dallas, Texas, and Zachary Zimbile of Allenwood, N.J.; and sophomore Louis Brotherton of Seattle, Wash.

They won first place in the national round of the KPMG Global Case Competition in Atlanta, Ga., in January to advance to the international competition.