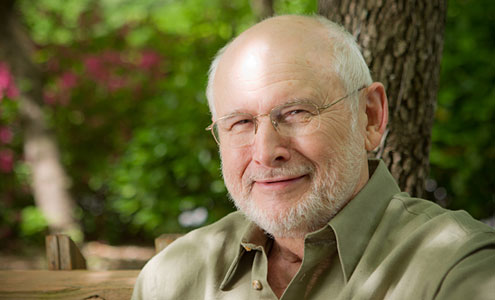 Boys being boys, they’ll dare each other on a whim to do wild and crazy stuff. Which explains why Larry West has enjoyed a long and venerable career as a college German professor.

That career, spent almost entirely at Wake Forest, drew to a close this spring with his retirement from the Department of German and Russian. Behind him, the 68-year-old West leaves a redoubtable legacy as a teacher, scholar and study-abroad administrator, along with a cadre of devoted colleagues and former students who have been inspired by his dedication and regaled by his wit.

“How does a class whose topic is a language that’s rarely spoken outside of three countries in the world change the lives of its students?” asks Brian Walls (’99), co-owner, with his spouse, of a physical therapy and sports fitness company based in Philadelphia. “The class doesn’t; the professor does. Dr. West has an innate ability to see each student for the person they are and will become. He loves to teach not just the German language, but also an appreciation for the special gifts inherent in each of us.”

West grew up in the tiny town of Canada (population 400) in eastern Kentucky. After elementary school (which included four years in a two-room schoolhouse), he attended a countywide high school, where he hung out with “the nerds who took all the hard courses.” The school started offering German his senior year, and a friend and fellow nerd issued a dare — he would take a German course if West did. “Of course I couldn’t resist,” West recalls. “Turns out I fell in love with the language.”

His choice of college, nearby Berea, didn’t offer a German major, however, so he bounced around from subject to subject, never settling on one in which to major.

“I finally woke up to the fact that I loved German, so about 15 of us lobbied [the academic policy council] to circumvent the objections of the dean, who was biased against the language based on his hostility toward Nazi Germany,” West says. “We were successful, but I didn’t have much time left to complete a major, so between my junior and senior year, I rode for 17 hours on a bus — the first time I’d been out of Kentucky — to study at Colby College in Maine with top students from elite colleges.”

He would become the first German major in Berea College history, but also had become motivated to pursue an academic career in the language. For his doctoral studies, West enrolled at Vanderbilt University, eventually choosing as his dissertation topic the scholarly specialty of his adviser: the medieval German passion play.

The genre, which portrays in elaborate detail the passion, crucifixion and resurrection of Jesus, survives in the renowned, once-every-decade production at Oberammergau in heavily Catholic southern Bavaria. But centuries before the Oberammergau pageant began in 1634 as a demonstration of the town’s gratitude to God for its salvation from the Plague, dozens of passion plays were staged throughout what are now northern Italy, Austria and southern Germany. If you think the Oberammergau production’s running time of six hours would be an ordeal to endure, consider that some of the earlier passion plays ran as long as six days, with virtually no break. West has translated two of them into English. “As far as I know,” he says, “I am the only English translator of medieval German passion plays in the world.”

After completing his doctorate in 1967, West spent two years on the faculty of a small college in Georgia before coming to Wake Forest in 1969. Surprisingly, he had never been to Germany before his first trip in the early 1970s. Since then, he reckons he’s taken 17 or 18 student or alumni groups there. For the past quarter of a century, he has overseen the study of Wake Forest students in Germany and Austria, including, since its launching in 1999, the University’s own residential study program at its Flow House in Vienna. Professor of Music and Beethoven scholar David Levy will succeed him as Flow House director.

This is the year for the Oberammergau production and it is being staged virtually every day from Holy Week through early fall before sellout audiences of 5,000 or more in an outdoor theater with spectacular views of the Alps in the background. West, who has befriended the father of the production’s renowned director of the past 20 years, Christian Stückl, will be taking a group to Oberammergau this summer and hopes to interview Stückl for an article he’s writing. Beyond that, there will be more time to spend with his wife, Suzanne, their two grown daughters and their grandchildren.

“Wake Forest has been a great situation,” says West, whose only temptation over the decades to leave the University — and a mild one at that — was a brief flirtation with his beloved Berea College. “I’ve had wonderful colleagues and we’ve always had a terrific department.”