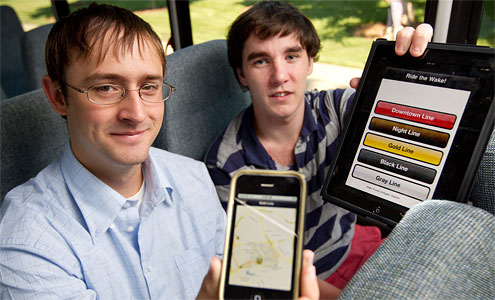 Some seniors, in the spirit of Pro Humanitate, have left legacies at Wake Forest that will last long after the last tasseled cap falls on Hearn Plaza.

What to do with unwanted textbooks? Use them to help others learn to read. Business major Andy Ronan worked with Volunteer Services, the University Bookstore and Better World Books to recycle almost 100 shipping boxes of books and raise money for literacy programs worldwide at the same time. Ronan arranged for students to recycle books the bookstore can’t buy back through Better World Book, an online bookstore. The idea raised approximately $700 for Wake Forest’s international service trips. “I was inspired to implement this project because it is an easy way to promote sustainability on campus while helping those in need,” Ronan said. “As students become more aware of the initiative, I hope the project will continue to grow.”

At the beginning of the spring semester of her senior year, biology major Jesse Conyers discovered a lump in her breast. The tumor was not cancerous, but the experience inspired her to write a children’s book, “Cancer Answers,” as her final project in her cancer biology class. The book helps young children understand the concept and basic biology of cancer. Students from Lothrop Elementary School in Omaha, Neb., illustrated the book. “Through my personal research on breast cancer and treatments, I found out first-hand how frightening and complicated the disease can be,” Conyers said. “I began to think about who might benefit most from a book that could explain the disease in a simple way, and decided to reach out to children.” Conyers and her biology professor Dan Johnson are working to secure a publisher for the book.

The Senior Class Scholars program is a new initiative that uses money given by seniors to pay down debt for select students in the class of 2014. Senior class members raised $12,500, enough to name five scholars who will receive $2,500 each. Seniors hosted various events during the year to raise money for the new scholarship program. “The program gave graduating seniors the chance to give several first-year students a financial boost. We hope the funds will allow the Senior Class Scholars the freedom to make a greater impact on the community during their four years at Wake Forest,” said senior communication major Melissa Beckett.

New construction and renovations to the Reynolda Campus inspired senior biology major Andrew Collins to develop a campus tree-care plan during his internship with the Office of Sustainability. Promoting species diversity and protecting high-value, heritage trees are two of the policy’s primary goals. Collins gained a solid understanding of trees and forest structure during his study abroad in Peru, where he researched tree species diversity, and during an internship in Switzerland, where he gained hands-on experience in environmental management issues. “The tree-care plan provides a policy structure for the Reynolda Campus now and far into the future. With guidelines in place, the University can continue to grow as a campus, yet at the same time, take into account the value of our tree communities and their benefit to our campus’s overall natural environment,” Collins said.

To help reduce the number of cars needed on campus, the Black, Gold and Gray shuttle lines were launched in January 2010 to provide service to off-campus apartments, downtown and other locations. The single shuttle that had previously operated on campus was regarded as unreliable. Three students set out to change that perception and encourage more ridership. Seniors Michael Crouse and Thomas Loughran worked with sophomore V.J. Cerniglia and computer science professor Daniel Canas to develop an iPhone app to track the shuttles’ locations using a GPS program. The shuttle location is updated every five seconds so riders know when to head out to meet the bus. Commercial products with equivalent capabilities run tens of thousands of dollars. The campus shuttles have carried over 14,000 passengers since the routes began in January. “Having the GPS real-time capability reinforces the dependability of the service and builds trust and credibility for the shuttle program,” said Jim Alty, associate vice president of facilities and campus services.

Senior biology majors Jane Lee and Sara Branson met in a first-year seminar their freshman year. The class, taught by physics professor Jed Macosko, had an entrepreneurial focus that inspired Lee, Branson and four of their classmates to form a company called BioBotz. Four years later, their educational video game called CellCraft was unveiled at the White House on May 12. Lee and Branson wrote a short encyclopedia to accompany a three-minute animated musical called “Cell Side Story” that was made available to North Carolina schools through the support of the North Carolina Biotechnology Center. This summer, Lee will collaborate with sophomore Sam Flynn to create a series of children’s books to teach children about the molecular machines inside a living cell. “The BioBotz project combined my interests in science, entrepreneurship, art and technology,” Lee said. “I continued with the project because I wanted to apply my education in a meaningful way and because I believe in the importance of promoting science education using entertaining media.”