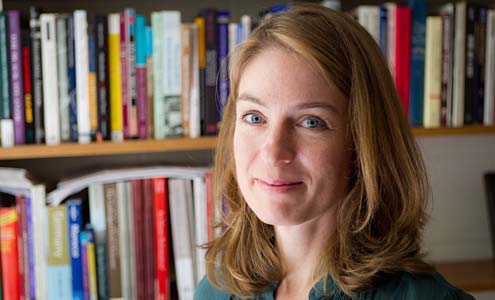 Michaelle Browers has spent half her academic career in the Middle East.

An associate professor in the political science department, she’s conducted research in Lebanon, Egypt, Yemen, Syria, Jordan and Morocco. She’s fluent in Arabic, yet one of the first things she does when she prepares for a trip is to hire a language tutor. The language is complex, but so is her area of expertise. And language is the vehicle that led to two decades of study in the politics and culture of the Middle East.

Her ongoing research has earned her a $50,400 grant from the National Endowment for the Humanities to complete a book titled “Arab Shi’i Political Thought Since 1958: A Generation’s Politicization.” She is one of five Wake Forest faculty members to receive NEH grants this academic year.

The recognition is well deserved, said Katy Harriger, professor and chair of political science. “The grant is a testament to the quality of Michaelle’s research agenda and will allow her to spend an uninterrupted year focusing on her research and writing,” Harriger said. “It is a sign that we have scholars with national and international reputations in our department, and that while demonstrating an ongoing commitment to excellent teaching, we are also serious about excellent scholarship.”

Browers’ interest in the Middle East began when she studied Arabic during the two years she took off between college and graduate school. She had studied German through high school and into college, but an internship with The Middle East Journal after graduation gave her access to the Middle East Institute’s Arabic courses.

It took four years to learn the basics, but as her language skills grew so did her interest in studying the ideas driving a political world that was not well understood in the West. And as her research became more in-depth, she began traveling to interview political and religious leaders and academics.

“Once you learn a language, you form a tie to the place where the language is spoken and the people who speak it,” she said.

She developed a web of contacts to gain access to fellow researchers, which eventually fostered meetings with secular intellectuals and activists, as well as ayatollahs and imams.

“One of the main things (my work) tries to do is give a sense of the breadth and diversity of the ideas and the interests of Arab intellectuals.”

She is in her third year of work on her current project, which is focused on a generation of political thinkers who emerged within traditional Shi’i educational institutions in the 1960s. Just as college students in America launched a political movement, a generation of “activist intellectuals” emerged in the Arab region during the same period. They were interested in reforming their society in order to bring about a free and more just present.

The political trends launched by that generation are still factors within Arab politics, though their influence has waned somewhat as younger leaders have pursued other courses of action and thinking, Browers explained.

Some of the members of the political movement are still alive, and their writings are circulated widely throughout the Middle East. But some of the writings from and history of the early, student years of these thinkers has not been fully analyzed.

She is cautious about her travel plans, but she still travels freely. After spending so much time in the Middle East, she knows her way around and she enjoys the ideas she discovers. “This region is one in which I find interesting political questions, as well as a space inhabited by many friends and colleagues.”