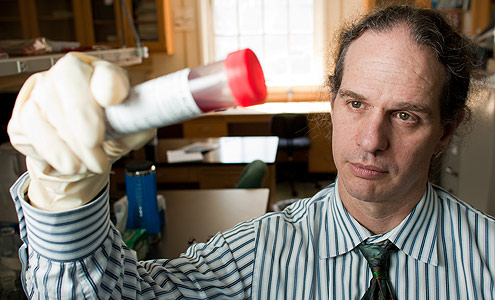 The National Heart, Lung, and Blood Institute (NHLBI) of the National Institutes of Health, announced today that it will fund nine research grants to improve the safety of red blood cell transfusions.

Professor of Physics Daniel Kim-Shapiro and a collaborator at the University of Pittsburgh have been awarded a $2.8 million, four-year grant to study why the quality of stored blood degrades over time and to investigate ways to make transfusions using older blood safer.

Eight of the grants, including Kim-Shapiro’s will provide a total of $3.9 million per year to researchers for four years to assess the safety and efficacy of red blood cell transfusions. The other grant announced will support the first large, multi-center, randomized clinical trial to compare outcomes in heart surgery patients who receive transfusions of red blood cells that have been stored for shorter or longer amounts of time.

“These are the first research projects to systematically examine the storage-and preparation-dependent changes that red blood cell units undergo,” said NHBLI Acting Director Susan B. Shurin, M.D., who announced the grants on June 21. “These basic and translational studies embody the NHLBI’s goal to advance the science of blood safety in the nation. What we learn will help guide clinical practice.”

Kim-Shapiro, who holds the Harbert Family Distinguished Chair for Excellence in Teaching and Scholarship and directs Wake Forest’s Translational Science Center, received the grant with Mark Gladwin, M.D., at the University of Pittsburgh. Gladwin is director of the Vascular Medicine Institute at the University of Pittsburgh and chief of the division of pulmonary, allergy and critical care medicine at its School of Medicine.

They propose that transfusion damage from stored blood can be traced to reduced levels of nitric oxide, a chemical that causes blood vessels to expand so that they can take in more oxygen. The team will study whether microparticles and free hemoglobin released from ruptured red blood cells in stored blood soaks up the nitric oxide that patients need.

Recent clinical studies have raised concerns that transfusions using blood stored longer than 14 days may increase the risk for cardiovascular events and organ failure, particularly in certain patients who receive multiple units of aged blood, such as those who have had coronary artery bypass or heart-valve surgery. Scientists call the blood-degradation problem the “storage lesion.” Currently, FDA regulations allow facilities to store red blood cells for up to 42 days before being transfused. The average age of transfused red blood cells in the United States is estimated to be a little more than 16 days, according to the NHLBI.

“It’s possible that an agent that increases nitric oxide levels, such as sodium nitrite, could be added to banked blood or given directly to transfusion patients to compensate for the potential complications of a storage lesion,” says Kim-Shapiro, who has previously worked with Gladwin and Wake Forest Professor of Chemistry Bruce King to investigate the effects of nitric oxide on sickle-cell anemia.

“These studies will lead to a better understanding of the changes that occur as a function of red blood cell preparation and storage time and their effect, if any, when transfused,” said Simone Glynn, M.D., chief of the Transfusion Medicine and Cellular Therapeutics Branch in the NHLGI’s Division of Blood Diseases and Resources, in a news release from the NHLBI. “The results of this work could lead to improved red blood cell therapies that optimize tissue oxygen delivery in transfusion recipients.”

Kim-Shapiro and Gladwin have begun conducting experiments at Wake Forest and the University of Pittsburgh to quantify the effects of storage lesion and investigate the feasibility of additives that could be used to restore nitric oxide function to stored red blood cells.