Students and professors travel to India 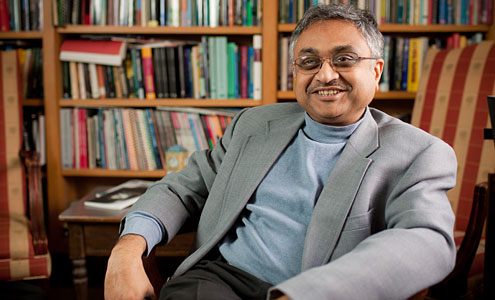 The stage is set for India to play a significant role in global business, politics and culture, says communication professor Ananda Mitra, who is leading an educational trip of his home country this month for 11 students.

Mitra, along with his wife, Swati Basu, is leading the trip as part of his summer class, “Communication, Culture and Sustainability.” What gives the trip an unusual twist? While experiencing the diversity of daily life in India, students are able to share their insights with mentors who are both from Wake Forest and from India.

“What a trip it has been so far,” Mitra said in a posting to the group’s Facebook page. “An absolutely fantastic set of individuals have come together to create a learning community that exemplifies the ‘ashram’ system of teaching.”

Basu, who is a research professor in the physics department, said that although Winston-Salem is her family’s home now, she is excited to share the sights and sounds, both urban and rural, that are unique to her homeland. Basu will be an especially valuable resource for the nine female students taking the trip as they explore Indian culture from a woman’s perspective. “India is very people-oriented. The students will be able to learn a great deal about life in this part of the world.”

Mitra, who conducts research in the outsourcing of American jobs to India, says the trend to move work to that country will continue, though the transfer of work may be less noticeable. “You might turn in your tax records to a tax preparation company in the U.S., but they will be processed in India,” he says. In addition to sending work to India, Indians are coming to live and work in the U.S. Some are especially skilled in software development and technology and spend time in American companies training workers.

“Whether this is a good thing or a bad thing doesn’t matter. It’s a thing that’s happening, and students must be prepared,” he said. “Our trip is an opportunity for students to immerse themselves in Indian culture and to learn how to negotiate unfamiliar situations in a new environment. It is critical for young people today to learn about India. It is a culture that will be very important in their professional lives.”

India has maintained its sense of character in the face of globalization—choosing those parts of American culture it wishes to incorporate while keeping its own traditions and lifestyle. The popularity of “Slumdog Millionaire” and Bollywood-style films show that America is equally interested in Indian culture.

“I’m excited to see which trends translate across the world,” says junior anthropology major Carrie Stokes, one of the students on the trip. “Dr. Mitra is keen on giving us ample free time on our own in order to best explore, study and research topics of our own particular interest.”