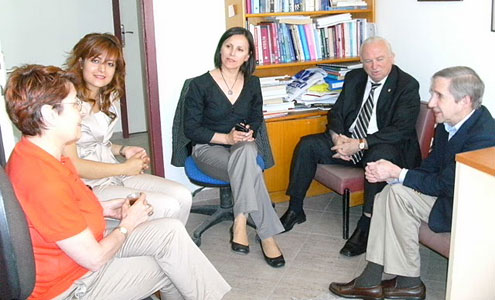 Chair and Professor of Counseling Samuel T. Gladding shared his expertise of family counseling with educators and students in Turkey during a month-long stay there this summer as the University’s first Fulbright Specialist scholar.

Gladding (’67, MA ’71) gave a number of lectures at several universities on various aspects of counseling to graduate students, advanced undergraduates and professors. He also led a two-day workshop for the Turkish Psychological Counseling and Guidance Association.

“It was an opportunity to share my knowledge, to further the counseling profession in a different country, and to learn more about a culture with which I was not familiar,” said Gladding, who made his first trip to Turkey.

While Gladding is the first Wake Forest faculty member to be named a Fulbright Specialist, other faculty members have received other Fulbright awards. In 2008, business professor Jon Duchac was named a Fulbright Distinguished Chair and taught for a semester at the famed Vienna School of Economics. The same year, Sylvain Boko, Zachary T. Smith Associate Professor of Economics, and David Weinstein, professor of political science, won fellowships from the Fulbright Scholar Program to teach and conduct research for a year in Uganda and Germany, respectively.

Fulbright Specialists are selected for short-term teaching opportunities by the Council for International Exchange of Scholars, which administers the Fulbright programs for the U.S. state department. Gladding, who has written numerous books, book chapters and articles on family therapy and other counseling topics, was accepted as a specialist in family counseling. His most recent book, “Family Therapy: History, Theory, and Practice” (Prentice-Hall, 5th edition), was published in June.

“Although a number of universities in Turkey offer counseling programs, it is still a relatively new field,” he said, “similar to where the counseling field in the U.S. was 20 years ago. There is no tradition of family counseling there but there is movement towards one, so we looked at how mainstream family theories translate into what counselors do in practice.”

Gladding did role-play exercises with students and counseling professionals to show them how family counseling techniques work. He also gave numerous lectures to explain the philosophy and theory of family counseling and how to apply what they learned in the classroom to clinical real-life counseling situations.

He taught a two-day workshop on marriage and family therapy for counselors and psychologists for the Turkish Psychological Counseling and Guidance Association. He also gave about a dozen shorter workshops and presentations — on topics ranging from “The Creative Arts in Counseling” and “Humor and Mental Health” — at universities in Istanbul, Ankara and Izmir.

Gladding has taught, researched and written about counseling for more than 30 years. He joined the Wake Forest faculty in 1990 as an assistant to then-President Thomas K. Hearn Jr., and later served as the University’s associate provost before being named chair of the new counseling department in 1996. Since then, he has taught undergraduate classes on the Creative Arts and Counseling and graduate courses on family counseling. A former president of the American Counseling Association, he was once cited as among the top 1% of contributors to the Journal of Counseling and Development, the flagship journal of the American Counseling Association.