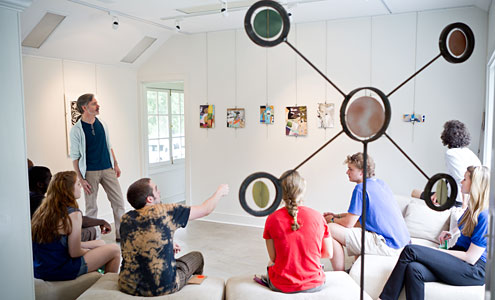 For the third time, Paul Bright is exhibiting his works of collage in a historic space in Italy. “Suono e Carta” (“Sound and Paper”) will be on display later this month and in September at Belriguardo, the Renaissance estate of the Este family outside of Ferrara, between Venice and Bologna.

For the second time this year, Bright’s exhibit will incorporate sound collages in addition to works of paper. He combined the two in an exhibit that ran in April and May at the Leyton Gallery in St. John’s, Newfoundland.

Bright, the assistant director of the Charlotte and Philip Hanes Art Gallery, previously exhibited his work in Italy in Pisa and Cento, both in 2007.

Bright sees the world as a collage of sights, sounds and sensations, bits and pieces that join and overlap to make a whole. “Now, we all live in ‘collage world,’” he said.

He combines bits of paper — ticket stubs, poster fragments, foreign newspapers, labels — with cardboard, window screen and other materials for his “physical” works. And he sometimes goes to great lengths to snatch an especially intriguing piece of detritus. “Somewhere, there’s a picture of me dumpster-diving in some Italian city,” he said.

For his sound collages, he collects everyday noises from around the world, capturing them with a small digital voice recorder that he always carries.

“It’s easy to gather sound and do it inconspicuously,” he said. “A lot of times, it’s what people call noise.” Taken out of context, the roar of a lawnmower or the whoosh of a car driving by are hard to recognize, but all the more useful for collage, he said. He combines the bits of sound — sometimes consecutively; sometimes overlaid with others — in two-to-four minute compositions.

For the second time, Bright taught a class this summer on collage as a media-independent approach; the students apply the principles of collage in a variety of materials and forms, from paper to digital, to sound or video. The college students in his class are accustomed to visual stimuli but haven’t worked with their hands a lot, he said. Sometimes they find it intimidating to peel away layers of posters and rip up paper.

“But once they get their heads and hands into it, it’s really hard to get them out of it,” he said.