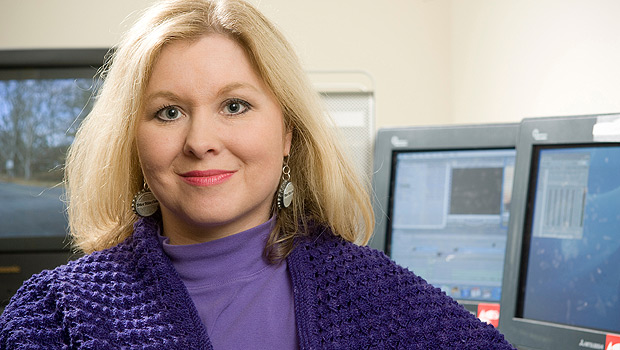 From the earliest films to modern remakes, horror movies have frightened viewers by focusing on human vulnerability, says Associate Professor of Communication Mary Dalton. Movies about vampires and werewolves show us that even the best of men and women are bitten and fall victim to the accompanying loss of control. Mad scientist movies explore the loss of control when experimentation goes awry. Dalton, an expert on movies, television, Hollywood trends and pop culture shares her insights into why horror movies are popular and makes recommendations for Halloween viewing.

Why are scary movies so popular?
Audiences like the extraordinary, and enjoy the emotional rollercoaster of following people in peril. At a safe distance from the screen (big or small), we can feel the adrenaline pulse through our veins when the tension rises without facing the actual decision of fight or flight. Horror movies have remained popular since the days of silent cinema. I think people like to escape their daily routine by immersing themselves in these fantastic tales that unleash our collective imagination. Monster movies have a particularly long and rich history, and it’s fun to note the consistency and variations of these films over time.

Do you remember your first horror movie experience?
When I was growing up, groups of neighborhood children would go together to see movies like “Blacula,” “Dr. Phibes Rises Again” and “Godzilla vs. the Smog Monster.” We’d also have sleepovers and watch old horror films on a local version of Shock Theater. These movies terrified and delighted us. Of course, the most exciting night of the year in terms of scary movies was always Halloween. Long before the days of cable on demand and video rentals by mail, we just had to take what was available, but on Halloween there were always choices to make.

What are some movies worth watching this Halloween?
Many of my favorites featuring vampires, werewolves and mad scientists are noteworthy for historical value as well as fear factor. I’ll recommend two in each category.

“Dracula” (1931) and “Horror of Dracula” (1958): Vampires are all the rage now with the “Twilight” series and multiple television shows, but the classic vampire was a nasty, ugly creature (think “Nosferatu”). All of this changed in 1931 when Bela Lugosi made the vampire sexy in “Dracula.” It’s a little slow and stagey, but it’s still worth seeing. Hammer Films “Horror of Dracula” brought color, good production values and Christopher Lee and Peter Cushing to the screen. There are some chilling moments, especially the final scene.

“The Wolf Man” (1941) and “Curse of the Werewolf” (1961): I like the classic Universal telling of the story, “The Wolf Man.” The most famous line says it all: “Even a man who is pure in heart and says his prayers by night may become a wolf when the wolfbane blooms and the autumn moon is bright.” Werewolf stories are often heartbreaking because they suggest that we cannot control our destiny or overcome our fate. Even the most steadfast of men cannot avoid becoming a beast when bitten – what tragedy. For a change of pace, I recommend “The Curse of the Werewolf,” which alters the fundamental premise of how one becomes a wolf-man. Instead of becoming a werewolf from a bite, a baby develops certain tendencies from the circumstances of his birth.

“The Bride of Frankenstein” (1935) and “The Invisible Man” (1933): With the mad scientist movies, I think the classics prevail over more contemporary versions. The most famous, of course, is Dr. Frankenstein. Unlike the werewolf who is a victim of his fate, mad scientists are trying to choose or change destiny. Of course, it’s worth noting that these scientists invariably flub up their attempts to improve on nature. Most of these films emerge from a modernist period when people thought that science would solve all of the world’s problems, but the movies themselves tell a different story of science gone haywire. My favorite mad scientist movies are the thrilling “Bride of Frankenstein” and the immensely entertaining film “The Invisible Man.” Claude Rains is scary, and his performance (mostly invisible) is a delight.