Under the ‘Big Tent’ 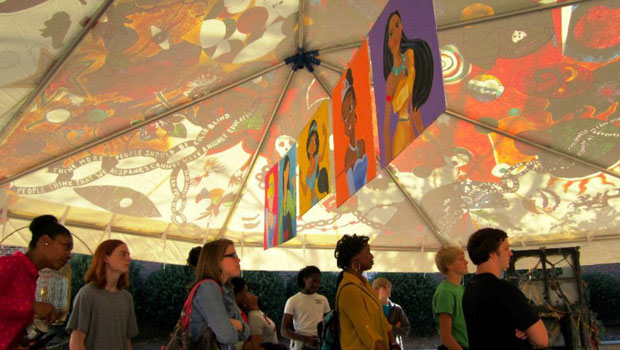 Mt. Tabor High School students arrived at school on October 24 to find a large, colorful tent in one of the school’s courtyards. Under the “Big Tent,” they found Wake Forest student artwork, selected specifically to engage these teenagers in challenging conversations about race and stereotypes. 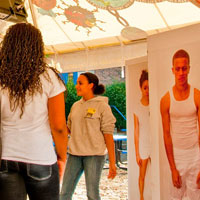 One piece, “Ambiguity in Race” by senior De’Noia Woods, shows full-size photos of three young adults in white undershirts and briefs. The high school students were asked to describe the ethnic background of the people in the photos and talk about the expressions on their faces.

“How do you think these people in the photos feel about being looked at in their underwear,” Finn asked the students. “Do you feel vulnerable, like you’re undressed, when people look at and make judgments about you?”

Mary Cecilia Conte, a junior health and exercise science major was one of the student leaders who guided small groups of high schoolers through discussions about the art on display. Conte says she joined the “Big Tent” project because she grew up with racial stereotypes that are often strongly upheld in small towns without much diversity, and would like to dispel them. Conte is of Irish, Scottish, English and Italian descent.

“It’s important to open students’ minds to how much they actually hold on to stereotypes, whether they are aware of it or not. As each group of students came to look at the artwork and learn, I felt myself become surer about the importance of what I was doing,” said Conte.

Artwork under the Big Tent spurred discussions about female body image issues, religious and cultural stereotypes, and the appearance versus the reality of our feelings and behavior towards others. While several students mentioned that they enjoy the diversity of students at Mt. Tabor, others commented on how students do tend to separate into racial and ethnic groups when it’s time to eat lunch.

“I can’t judge because I, too, stereotype and classify people,” Conte said. “The ‘Big Tent’ is a wonderful and creative way to explore our true feelings, to become aware of that which we might not necessarily want to be aware of, and to learn what it is to be a part of a growing multicultural American society.”

Not only did these high school students experience the “Big Tent” through visits and discussions – some also submitted the designs that cover the 25’ diameter tent itself.

The tent is both a work of art and a physical area to encourage community discussion. It is part of the Transforming Race project — a collaboration between Finn and the Winston-Salem Department of Human Relations and was funded by The Kenan Institute for the Arts. The Big Tent project is also funded by Wake Forest University’s Institute for Public Engagement

The tent will continue to travel to local schools and be on display at Wake Forest on Hearn Plaza in March as part of a “Faces of Courage: 50 Years of Integration” celebration.