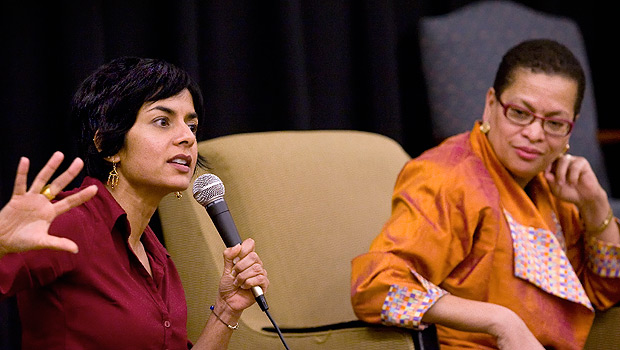 The two leaders in the environmental movement spoke to a standing-room-only crowd in Carswell Hall’s Annenberg Forum.

Since the 1970s Americans have benefited from legislative action to clean up air and water supplies, remedy toxic spills and increase food safety. In many communities, grassroots efforts provide a backstop where legal compliance is absent.

Malveaux said it takes audacity to believe that all people should have the same good things. “Degradation of our environment in someone else’s neighborhood is a rejection of that person’s humanity.”

But in both rural and urban areas across the U.S., racial minorities and the economically disenfranchised suffer disproportionally from the ill effects of assaults on the environment and often lack access to the power to protect their communities.

“African Americans still lag in our economy,” said Malveaux, who is an economist. “Recession has made inequities much worse. 14.3 percent of our nation lives in poverty. 25.8 percent of these people are African American. 25.4 percent are Latino. There are poor areas in Mississippi that have never seen clear water, but the people who live there are told it’s safe to drink. Certain people are not entitled to the same things other people are entitled to. What is acceptable in ‘Sugar Ditch,’ Mississippi, would never be acceptable in White Plains, N.Y.”

Sethi links environmental justice to concerns about the future of humanity. “This generation is the first generation that may not outlive its parents,” she said. “Pollutants and toxins do not have boundaries. Toxins start in one place but they don’t stay there. If you put something into the environment that’s harmful, it affects everyone.”

Sethi said the solution for environmental injustice is about looking at the world differently. “Everything we love, everything we want to do or be, exists in this ecosystem. No one wants to live in a world with contaminated soil where they can’t drink the water.” Reusable water bottles, recycling efforts and walking rather than driving are first steps in nurturing a long relationship with the earth, said Sethi. But the best relationships, while gratifying, are messy, complicated and hard, she added.

Malveaux encouraged students to become involved by “examining the structural issues around environmental injustice and being willing to talk about the uneven distribution of resources and burdens.” She particularly encouraged people of color to become more involved.

“Environmental inequities can be solved,” said Provost Jill Tiefenthaler, who moderated the question and answer session following the presentations. “Bold conversations need to continue on college campuses to educate people about these issues and empower them to find successful solutions through economic, social and political action.”