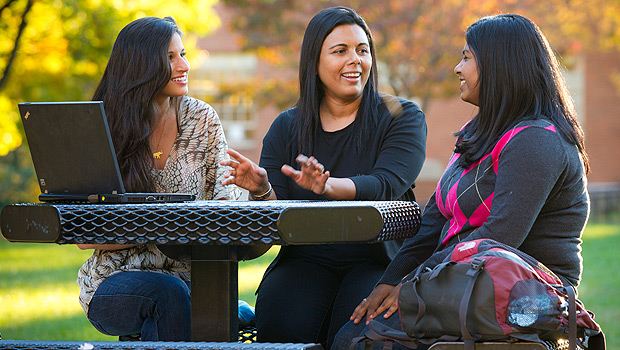 What do Indian food and filmmaking tell us about American society? More than you might think.

Both students used ethnographic research methods they learned in the classroom to conduct their research. The technique relies on personal interaction, participant observation within a community, and in-depth interviews as a way to learn about human experience.

“Globalization connects both these studies,” Hewamanne explains. “All countries are now connected in numerous ways — what happens in one country affects the other countries in the world. Global citizens are ones who understand this. These two studies, in their small way, help people understand the importance of global perspective in everyday life.”

For Bagel, an anthropology major, an ethnographic research course sparked an interest in learning more about immigration and the challenges people undergo living in a foreign country. To learn more about these issues, Bagel ate twice a week at a local family-owned and operated Indian restaurant. The family agreed to participate in the research.

With notebook in hand, she would have her meal — taking notes and talking with the Indian-American owners and employees. Bagel says one of the biggest challenges was connecting with the male owner of the restaurant. One evening after eating her meal, Bagel discovered she had left her wallet at home. She asked the owner if she could go and get her money — promising to come back and pay.

The mistake created an opportunity. “It was a nice breakthrough in the research,” says Bagel. “He started talking about how the same thing had happened to him. We had a long discussion about a variety of topics. He really opened up.” After that, she found the atmosphere less stressful. Another bonus, she grew to enjoy Indian food.

“It took a lot of courage for Bridget to go to the restaurant every week to connect with people from such a different background from her own,” says Hewamanne. “Bridget’s research helps us better understand immigrant groups by discovering what helps ease the transition into a new country. Her work connects to current debates on immigration and the associated fears and anxieties on both sides.”

Behind the glitz of Bollywood

Krishnan conducted her research in Mumbai, India. After a first-year seminar, “Visualizing South Asia,” where the class watched films from India, she decided to explore the changing Bollywood film industry.

Wanting to go behind the scenes, Krishnan researched the working conditions and ethics of Bollywood workers (crew, lighting, dancing, costuming, set design, sound mixing, technicians and extras) — focusing “an analytical eye where the camera does not.”

She spent months with employees in a film academy and on film sets — often communicating through a translator. Though difficult at first, Krishnan says as she followed the workers through their day-to-day routine, they began to share their experiences. The mid-level employees, in particular, enjoyed discussing the frustrations of feeling they could not do their best work under pressure from producers.

“My hypothesis was that the less-skilled workers in the industry would be those that were most likely to be overworked and underpaid. In fact, what I found was that unionization had helped this group of workers. The mid-level employees, however, who were not unionized, were the most frustrated and disillusioned. The pressure to work quickly often means they lack time to work carefully,” says Krishnan. Consequently, many lower-level workers do not seek to move up into the more prestigious mid-level positions because they lack job and financial security, she explains.

“I had so much confidence in my students that I arranged to give them an opportunity to present their work in a panel discussion at the foremost conference in the world on South Asia studies,” says Hewamanne. It was an unlikely opportunity — so surprising, in fact, that Hewamanne says the room erupted in applause when, after the presentations, the panel chairperson revealed that Bagel and Krishnan were undergraduates.

The 39th Annual Conference on South Asia was hosted by the Center for South Asia at the University of Wisconsin-Madison. The conference attracted more than 650 scholars who traveled from countries worldwide and featured academic panels and roundtables. Hewamanne organized the panel discussion, “Working for Meaning: Work, Identity and South Asians in a Globalized World,” where the students presented their papers.