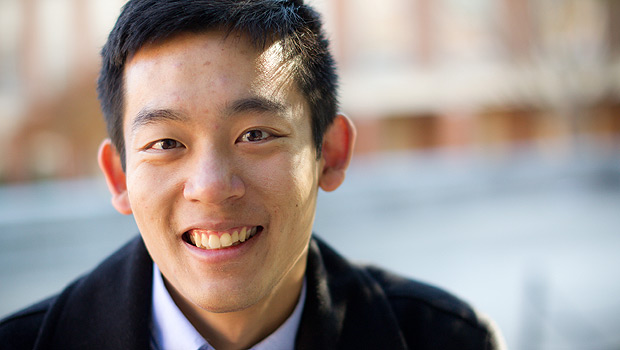 Senior Bo-Shan Xiang, who is on a mission to build American interest in the study of philosophy, has been awarded a Marshall Scholarship.

Xiang plans to study metaethics at the University of St. Andrews.

Established in 1953 to commemorate the Marshall Plan, the scholarships are awarded each year to up to 40 Americans and provide for two years of graduate study at a college or university in the United Kingdom.

“The Marshall will allow me to enrich my understanding of metaethical issues and philosophical methodology at one of the best philosophy departments in the UK,” Xiang said.

He is Wake Forest’s third Marshall Scholar in the past 10 years. The University’s most recent winners received scholarships in 2001 and 2006.

“Bo-Shan recognizes that ethics is not only a philosophical enterprise, but also a call to service,” said Wake Forest President Nathan O. Hatch. “We are proud of him and of his example of Pro Humanitate in action.”

Xiang, a philosophy major from Charlotte, is a Nancy Susan Reynolds Scholar at Wake Forest. He plans to become a university professor of philosophy.

“The combination of passion, high-level ability and work ethic… I haven’t really seen all these elements come together as I have in Bo,” said Professor of Philosophy Ralph Kennedy, who is Xiang’s advisor. “He pushes me to learn things I didn’t already know because he is so far-reaching in his research and interests.”

In his professional career, he intends to raise the profile of philosophy as a field of study. He aims to increase the number of American high schools that offer philosophy courses and introduce an AP philosophy exam. He also intends to encourage the study of philosophy by more women and minority students.

At Wake Forest, Xiang founded The Philosopher’s Guild, which meets weekly to debate ideas and encourage fellowship about philosophical and ethical thinking.

“The members of the Wake Forest philosophy department nurtured me to where I am,” Xiang said. “With my professors, I’ve conducted independent readings and independent studies in the philosophy of biology and metaethics, topics ordinarily found only in the course catalogs of larger universities. The smaller size of our department, and the fact that they’re wonderful people, permitted the really close mentoring relationship I have with many of our philosophy professors. Drs. Kennedy, Austin, Glezakos and Lee played integral roles in my becoming fascinated with philosophy.”

He researched “intrinsic natural value” at Yale University’s Interdisciplinary Center for Bioethics and has presented a paper at a joint meeting of the South Carolina Society for Philosophy and the North Carolina Philosophical Society. Xiang traveled to China to conduct an independent study of the financial and social dimensions of Beijing’s healthcare network.

“In addition to and perhaps despite his considerable intellectual gifts, Bo-Shan is a humble person,” said Tom Phillips, director of the Wake Forest Scholars Program. “He is famously well-read for his age, and we are proud of Bo for the type of record that would render him successful in one of the most competitive scholarships in the United States.”

He is a member of Phi Beta Kappa and has served as president of Wake Forest’s Model United Nations and Political and Foreign Affairs Team. He also serves on the editorial board of the Philomathesian, a campus literary magazine.

Xiang is the son of Yin-Tao Wang and Wei-Ning Xiang of Charlotte and attended Myers Park High School.