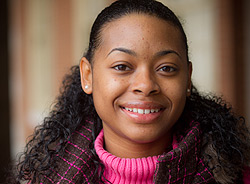 Ford and Herndon-Edmonds were recognized along with two recipients from Winston-Salem State University during a program on Jan. 17 celebrating the birthday of Martin Luther King Jr. Each year, Wake Forest and WSSU come together to present the awards and co-sponsor a MLK event. 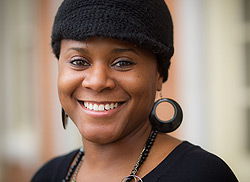 The MLK Dream Award recognizes one professor or administrator and one student from both Wake Forest and Winston-Salem State who embody King’s spirit and work to make his dream come alive in their communities.

Ford, a communication major from Knightdale, N.C., has been a part of the University’s Dance Company and Gospel Choir, and she serves as an Ambassador in Admissions and a resident advisor.

“She is a charismatic leader and uses her intelligence and strong commitment to academics not only to achieve personal success, but for the betterment of those around her,” said Weaver in presenting the award to Ford. “She not only works to create a more positive environment at Wake Forest, but also works, through service, to help foster a relationship with students at Winston-Salem State University.”

Herndon-Edmonds has worked at Wake Forest since 2006 and is assistant to the Senior Vice President/Chief Financial Officer, Hof Milam (’76, MBA ‘91). She was recognized for her work developing and implementing the Gatekeepers Workshop, a series of ongoing workshops on diversity and inclusiveness for faculty and staff. She also works with the Office of Multicultural Affairs to mentor students.

She was described by Weaver as “a strong advocate for diversity, multiculturalism, and the overall well-being of students. She spends much of her time working outside of her job description, helping to create an atmosphere that especially nurtures and supports students, faculty and staff from diverse backgrounds within the campus community.”