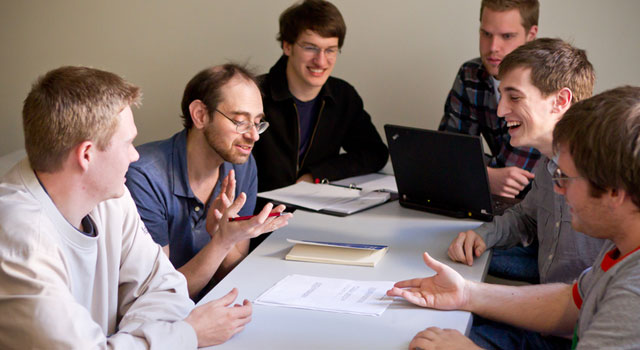 The word “research” brings to mind images of gloved and goggled scientists pouring chemicals into test tubes. But undergraduate mathematicians are also conducting research — some of this work extends beyond contributions in theoretical mathematics to applications in business, engineering, computer science, biology, physics, and economics.

Associate Professor of Mathematics and Z. Smith Reynolds Faculty Fellow Kenneth Berenhaut is committed to seeing the best of this research published.

In 2006, Berenhaut launched “Involve—A Journal of Mathematics” which publishes high-quality research articles that have been coauthored by students and faculty. It is the only student-faculty collaborative journal in mathematics. Berenhaut says it was born out of Wake Forest’s commitment to discovery, engagement and the teacher-scholar ideal.

Submissions in all mathematical areas are considered, but papers must include a minimum of one-third student authorship. The journal’s editorial board is made up of more than 50 noted mathematicians and mentors who are ardent supporters of collaborative research between faculty and students.

In the past eight years, Berenhaut has co-authored over 50 articles with his students. These papers have appeared in several well-known mathematics journals including the “Proceedings of the American Mathematical Society,” “Statistics and Probability Letters,” “Journal of Mathematical Analysis and Applications” and many others. Berenhaut’s students have spoken on their work at conferences worldwide including ones in Japan, Germany, Greece and Poland.

“I enjoy the energy and ideas that are part of conducting research with students. This is one of the main reasons I came to teach at Wake Forest. I wanted to be somewhere where students are as important as all others on campus,” says Berenhaut.

Benn Stancil, a 2009 Wake Forest grad, conducted research with Berenhaut and attended his classes. “Dr. Berenhaut combines devotion to his students with devotion to his research. He has helped countless students find grants, present at conferences and submit articles for publication. Thanks to his support and hard work, I was able to travel to a conference in Mexico last summer despite having graduated over a year before.” Stancil is currently on a fellowship at the Carnegie Endowment for International Peace.

“Involve” is in its tenth issue, with over 1,100 pages currently in print. Over 150 university libraries subscribe, including several U.S. News and World Report top 50 schools. The journal also has an international presence. The current issue has published articles from students and faculty at Stetson University, Bucknell University and the Università degli Studi di Napoli “Federico II” in Italy, to name a few.

Berenhaut, who joined Wake Forest in 2000, is two years into serving a three year term as councilor for the Council of Undergraduate Research (CUR) in the Mathematics and Computer Science Division. The organization supports collaborative research and scholarship between undergraduate students and faculty. He is the first Wake Forest faculty member elected to the council. In 2007, Berenhaut received the Wake Forest University Excellence in Research Award.

In addition to serving as managing editor of “Involve,” he is a member of the board of directors of Mathematical Sciences Publishers and serves on several other editorial boards in the mathematical sciences.

Berenhaut’s current research focuses on interactions between probability, statistics, discrete mathematics and analysis. The work has potential applications in clinical trials, informational and computer sciences, economics and decision analysis. His research is currently partly funded through a grant with the Department of Energy.