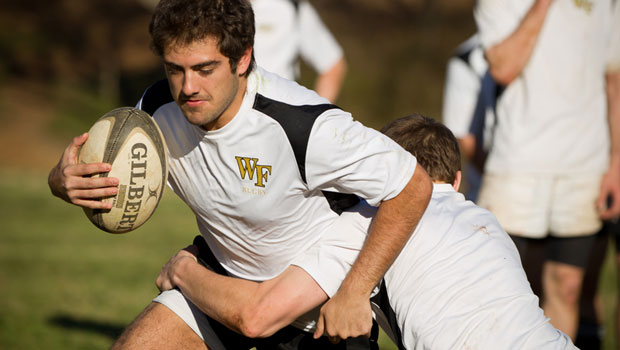 On Saturday, March 5, the  Wake Forest Men’s Rugby club will take on the University of Maryland on Poteat Field, marking the first home game for the team as participants in the Atlantic Coast Rugby League (ACRL).

The league began its first season this spring after officially forming in mid-2010. Nine of the twelve men’s rugby teams from universities in the Atlantic Coast Conference are competing.

“Collegiate rugby has traditionally been regionally based,” says Director of Wake Forest Rugby and coach Patrick Kane, who is also the ACRL’s commissioner. “With the new league set to capitalize on traditional ACC rivalries, we hope more students, alumni and fans will be excited about the games and get behind the program.”

The league, which is organized along the lines of traditional conference competitions, is designed to reward student athletes who are putting almost as much time into their sport as their varsity counterparts, says Kane, who graduated from Wake Forest law school in 2007. “Having a league that gives rugby players a similar experience to traditional conference competitions rewards these students for their efforts and increases interest in the sport.”

“The formation of the ACRL league is exciting because it ups the competition,” says Brandon Turner, a junior biophysics major from Fontana, Calif. “The new challenge has motivated the whole team to push ourselves harder, and I’m thankful to be able to come back for one more year after this one.”

Also on Saturday the team will also host the Wake Forest High School Rugby Showcase to increase visibility for the team and attract high school players who will come to see the campus and play in the tournament. “Rugby players are going to look harder at ACC schools because of the opportunity to participate in a league that mirrors other ACC sports rivalries,” says Kane. The bar will be raised in terms of the players’ skill levels as a result.”

The spring ACRL season will play 15 players to a team. The fall Invitational Tournament will be a Sevens format—a shorter, faster, version of the traditional 15-man game, which Kane says has been gaining popularity because “it’s an exciting game that’s conducive to the American sporting public’s short attention span and desire for fast-paced, high-scoring action.”

In October 2009, rugby Sevens was voted in as the newest Olympic sport and will make its first appearance in the 2016 games in Rio de Janeiro. 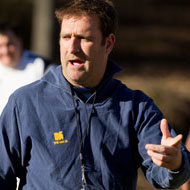 The idea for the league started in 2008 when nine men’s rugby teams from universities in the Atlantic Coast Conference participated in a weekend Atlantic Coast Invitational Tournament which Kane and his colleague Andy Richards co-founded. Richards is head coach of Virginia Tech men’s rugby program. Kane and Richards worked together to create the ACRL, the second rugby league in the nation that mirrors a traditional NCAA athletic conference—the first being the Ivy League, which was founded in 2009.

Kane, who is an associate at Smith Moore Leatherwood LLP in Greensboro says directing and coaching Wake Forest rugby is his second “full time job.” “I can only do it because of my family’s commitment to Wake Forest rugby. We spend our weekends traveling wherever the team is playing.” At least this weekend, they won’t have to far to go.

The ACRL is not affiliated with or endorsed by the ACC and is a completely separate, unrelated entity.