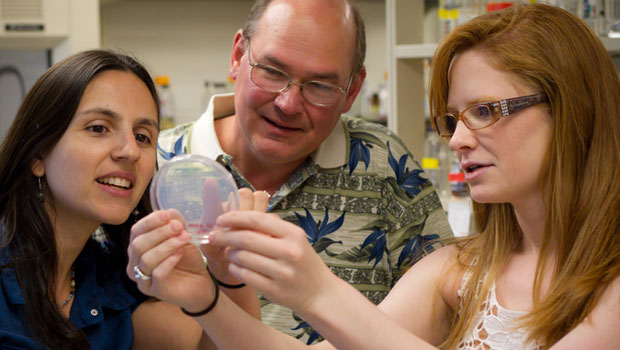 When penicillin was first introduced in 1943, many considered it the silver bullet against infection. But only three years after penicillin’s introduction into the antibiotic arsenal, the first signs of resistance appeared.

Bacteria continuously develop protective armor, rendering one after another class of antibiotics ineffective and precipitating the need to discover new ones. Today, in the U.S. alone, approximately 80 million prescriptions for antibiotics are filled annually.

For almost three years, King and Wake Forest chemistry major Allison Faig, have been researching nitroaromatic antibiotic medications used to treat various  bacterial infections, such as tuberculosis and the parasite giardia — the leading cause of diarrhea in the developing world and a particular danger for children and older adults.

To gain knowledge about how this family of antibiotics works might lead to the development of new, first-line treatments for giardiasis, says King, which is important as resistance happens quickly, often within a few years of a drug’s introduction. Finding new treatments for giardia is important because research dollars are not readily invested in this area, King says, and “as a global society, we are as weak as our weakest link. Developing countries should benefit from the research and drug development underway in wealthier nations.”

With a grant from the Wake Forest Research Fellowship Program, Faig began working in King’s organic chemistry lab examining a family of antibiotics to determine if their similar molecular structures, which include a nitro group, work in similar ways to destroy bacteria.

“We subjected the molecule to chemical conditions we thought might be happening in the body to determine what part of the antibiotic is actually killing the bacteria,” says Faig. “The drug itself is not dangerous. It’s what is released by the drug that does the job, and that’s what we were hoping to find. The nitrogen oxide does seem to play a crucial role.”

The next step sent Faig from King’s lab to Patricia Dos Santo’s biochemistry lab to begin growing bacteria on which to test the antibiotics. “Before I could continue, I had to learn to grow bacteria to see if, when the nitrogen oxide was introduced, it inhibited the growth of or killed the bacteria.”

Faig says the research has taken longer than she anticipated because “keeping bacteria healthy is a time-consuming process.” She hopes the bacterial experiments will provide conclusive results before she graduates this May.

“I enjoy chemistry research that has an application outside the lab,” Faig says. “When it affects people in their daily lives, they take an interest in the work.”

Faig has presented her work at The 2009 Southeastern Regional Meeting of the American Chemical Society. and will be attending the 2011 Nitrite Conference in Atlanta this May.