Chasing away the exam blues 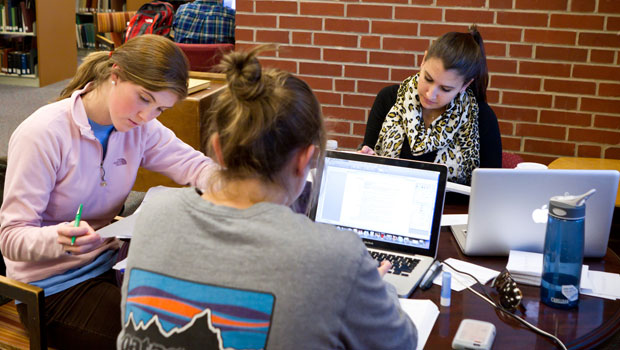 Kites, balloons, food and decorations. Sounds like a party, and, in a sense, it is — Wake the Library is a semiannual tradition that heralds the start of exam-week frenzy.

Today through May 6, hundreds of students will spend many hours in study groups, at tables and sleeping on couches throughout the Z. Smith Reynolds library.

The library’s 29 librarians and 23 staff members understand that, especially during exam time, students welcome extra support and a break from the hours spent slumping over keyboards and books. Raves, midnight snacks, Twitter feeds and an active Facebook page show the library’s commitment to reaching out to students.

During Wake the Library, the library provides food each night at midnight. Water and fruit, which are available every night of finals week, are coupled with selections of pizza, subs, chicken sandwiches and burritos. Midnight snack menus are posted on the Z. Smith Reynolds Library Facebook page each day.

Coffee, an essential commodity for many students during this time, is provided free. Approximately 2,000 cups have been ordered to sustain students through finals. In support of the University’s “green” initiatives, the library is asking students to bring their own reusable mugs. Cups, for those who forgot to bring one, will be available upon request at the circulation desk. There is no limit to refills. 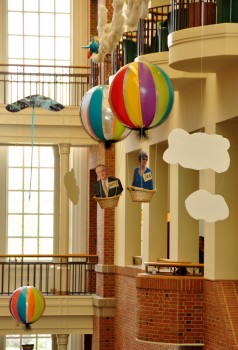 Decorations for “Wake the Library” are installed anonymously by students who refer to themselves as the “library decorating committee.”

The Z. Smith Reynolds Library Twitter feed will be posting current information and friendly tips throughout Wake the Library. From noon Sunday, May 1, to noon Monday, May 2, a “Tweet Your Favorite ZSR Study Space” contest is part of the event. A “Golden Ticket” to be first in line for one night’s midnight snack will be awarded to the best photo taken of a student’s study space. The library’s Web committee will chose the winner from the submissions received. The hashtag #wtl2k11 will be used to tie together all “tweets” related to Wake the Library on Twitter.

A video station and graffiti board provide constructive and fun outlets for students to express themselves during the week. Students can share their thoughts, send videos to friends, or just contribute whatever strikes them. Instructions for students to record their videos are posted by the video station. Last semester, students recorded 18 videos, which have received over 2,500 views on the Wake the Library YouTube channel.

The Z. Smith Reynolds library will remain open 24 hours from Friday, April 29, through Friday May 6, when it will close at 5 p.m. The serving of food at midnight begins on Friday, April 29.