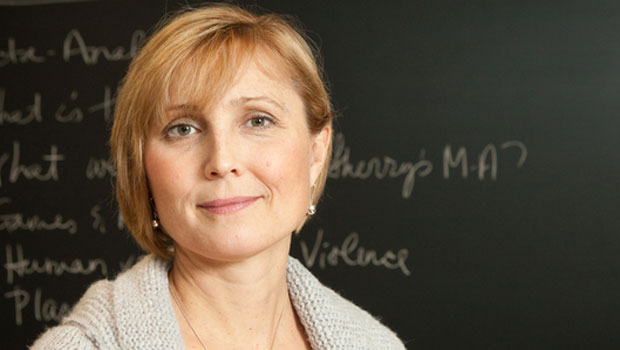 Krcmar says her students are often surprised when they look critically at mass media. One method Krcmar uses to get students thinking is to have them bring popular song lyrics to class. She then reads them aloud to the group. “After they’re done shifting uncomfortably in their seats, students almost always say they’re amazed at what’s being said. The goal is to have them become active consumers rather than passive recipients.”

Marina Krcmar in the News

Krcmar’s students also bring clips of television shows and video games for discussion. “Young adults are huge media consumers. It’s personal for them when we look at popular culture with a critical eye.”

A strong believer in using quantitative studies, Krcmar says when she begins to talk about academic research — like her own work on the effects of violent video games on adolescent risk-taking — the students are already “sold” on the idea that this kind of research is crucial.

According to the Nielson Company, the average American watched more than 158 hours a month of television in the home on a TV set in the first quarter of 2011. And a U.S.News Health article reports that more than two-thirds of daycare centers have TVs available for children.

“Video games have become more graphic and reality television is huge,” Krcmar says. “The mass media we consume grows more violent, sexually explicit and tawdry as society become more desensitized. The need to investigate the effects of exposure to these images and ideas, especially on children and young adults, is vital as media will continue to push the envelope for greater shock-value appeal.”