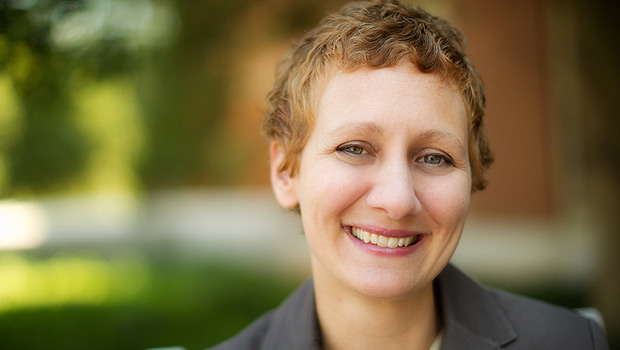 Angela Mazaris has been selected by Wake Forest to establish a Lesbian, Gay, Bisexual, Transgender, Queer and Questioning (LGBTQ) Center at the Reynolda Campus. Mazaris, who holds a Ph.D. in American Civilization from Brown University, will be responsible for establishing the new center as a source of educational programming, support and advocacy for the entire campus community. With the creation of the LGBTQ Center, Wake Forest joins its peer institutions among top-25 colleges and universities by formalizing the support it offers the LGBTQ community.

“Wake Forest values and celebrates diversity in all of its forms,” said Interim Provost Mark Welker. “The University’s mission is dependent upon our ability to provide a safe and supportive living and learning environment for the campus community. I look forward to working with Dr. Mazaris to demonstrate the University’s commitment to a welcoming campus culture.”

Before coming to Wake Forest, Mazaris served as a Presidential Management Fellow in the Internal Revenue Service and the National Park Service, where she developed agency-wide inclusion and diversity initiatives and prepared policy recommendations. At the IRS, Mazaris was in charge of a special emphasis program for LGBTQ issues – a first for the agency. She coordinated training opportunities and events to increase the organization’s cultural competency. Her work provided an opportunity to study how Federal agencies recruit, retain and promote people of different backgrounds. At the National Park Service, Mazaris’s work focused not just on the diversity of the workforce, but also the diversity of park patrons.

Mazaris previously served Brown University in a variety of positions. She taught classes on LGBTQ history as part of the American Studies department, served as coordinator of the LGBTQ Resource Center and served as graduate proctor of the Sarah Doyle Women’s Center. As the first coordinator of the LGBTQ Resource Center, she was responsible for everything from hiring staff and coordinating volunteers to creating support programs and campus events. The Center is now firmly embedded as a part of the University.

“I was honored to play a foundational role with the LGBTQ Center at Brown,” said Mazaris. “I am excited for the opportunity to help Wake Forest advance its efforts to support all students, faculty and staff. Everyone deals with issues of self-identity and self-acceptance, but there are added complexities for LGBTQ students.”

Mazaris stressed that the LGBTQ Center will provide services to the entire campus. “The center will provide support, advocacy and outreach, but it goes beyond the LGBTQ community,” she said. “It’s about creating the opportunity for everyone to engage in the Wake Forest community to their fullest potential.”

Mazaris pointed out that future business owners, ministers, teachers and health care providers all need to understand the diverse needs of the communities they will serve. She anticipates initiating campus-wide dialogues and moderated discussions on the topics of gender identity and sexual orientation with a specific focus on issues affecting Wake Forest.

The LGBTQ Center will be located on the second floor of the Benson Center and will report to the Office of the Provost.

“Diversity and inclusion can serve as catalysts for academic excellence and both are central to the mission of the University,” said Barbee Oakes, Assistant Provost for Diversity and Inclusion. “While ‘diversity’ used to be a code word for Black, today constituent diversity at Wake Forest also encompasses all historically underrepresented or underserved groups. The LGBTQ Center will be another key resource for academic programs and departments to educate, advocate for, and support our increasingly diverse campus constituency.”