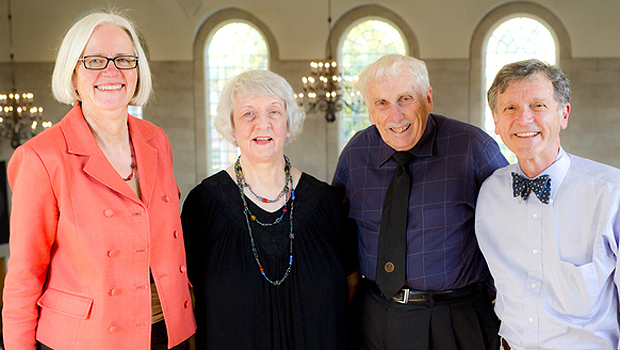 Professor of Church History Bill J. Leonard has been named the first James and Marilyn Dunn Chair of Baptist Studies at the Wake Forest University School of Divinity. Established in honor of the Dunns, influential Baptist leaders for more than half a century, the chair positions the School of Divinity as a leader in the ongoing conversation about the future of ministry in Baptist churches.

“The chair in Baptist studies focuses the school’s Baptist heritage and enables us to harness the strengths of that heritage for the education of leaders who will shape the present and future of Baptist life,” said Gail R. O’Day, dean of the School of Divinity.

Leonard, a scholar of church history and ordained Baptist minister, has dedicated much of his career to the study of the Baptist church. He was the founding dean of the Wake Forest School of Divinity.

“I am thrilled Bill has accepted the invitation to become the James and Marilyn Dunn Chair in Baptist Studies,” O’Day said. “Bill’s teaching, writing and public engagement with Baptist life will insure that the Dunns’ commitment to the preservation of individual liberty and freedom in Christ will continue at Wake Forest University School of Divinity as we educate a new generation of women and men for religious leadership.”

After retiring as dean in 2010, Leonard has continued to teach church history in the divinity school and the religion department.

“The Dunn Chair offers the University a tangible opportunity to celebrate its origins even as it moves toward greater inclusion of religious diversity and identities,” Leonard said. “In this position, particularly because it is named for the Dunns, I hope I will be able to explore that progressive Baptist identity and the role of conscience and dissent in shaping the relationship between faith and culture.”

Among Leonard’s most recent books are “Baptist Questions, Baptist Answers” (Westminster/John Knox, 2009) and “Baptists in America” (Columbia University Press, 2005). Prior to joining the faculty at Samford University in 1992, he taught for nearly 20 years at Southern Baptist Theological Seminary in Louisville, Ky. He earned a bachelor of arts degree from Texas Wesleyan College, a master of divinity degree from Southwestern Baptist Theological Seminary and a doctoral degree from Boston University.

James and Marilyn Dunn have been important partners in the work of the divinity school. This chair also honors their life’s work. James Dunn, who joined the School of Divinity faculty in 1999, is internationally known for his leadership of the Baptist Joint Committee for Religious Liberty and his expertise on church and state issues. Marilyn Dunn, a soprano, is a well-known Baptist musician.

“In the classroom, the pulpit and the public square, James has spoken out for Baptist ideals of separation of church and state, as well as Baptist theology and history,” O’Day said. “Over the past decade, James has helped to prepare dozens of new ministers for the challenges they will face as religious leaders, not only within congregations and non-profit agencies, but in the political and social issues of their communities.”

James Dunn served as executive director of the Baptist Joint Committee on Religious Liberty in Washington, D.C., from 1980 to 1999 and has served as president of their endowment. Dedicated to defending and extending religious liberty for all people, the organization deals with issues of religious liberty and separation of church and state for 14 Baptist conventions and conferences in the United States as well as for several hundred churches. For 12 years, Dunn was the executive director of the Christian Life Commission, the social action agency of Texas Baptists. He is a past president of Bread for the World and a former chairman of the Ethics Commission of the Baptist World Alliance. He serves on the boards of Baptists Today and the T.B. Maston Foundation.

Marilyn Dunn is the daughter of Edwin and Polly McNeely, longtime professors at Southwestern Baptist Theological Seminary. She has performed at various musical events in North Carolina, and performed with the divinity school choir.

“Marilyn and I are genuinely humbled and immensely gratified with the announcement of the chair,” Dunn said. “It is a high honor to be identified with the Baptist heritage of the divinity school at Wake Forest University. “We rejoice also that the first occupant of the chair is to be Dr. Bill J. Leonard, the preeminent historian of Baptists in the United States today. He is an incomparable participant observer of Baptist faith, life and practice.”