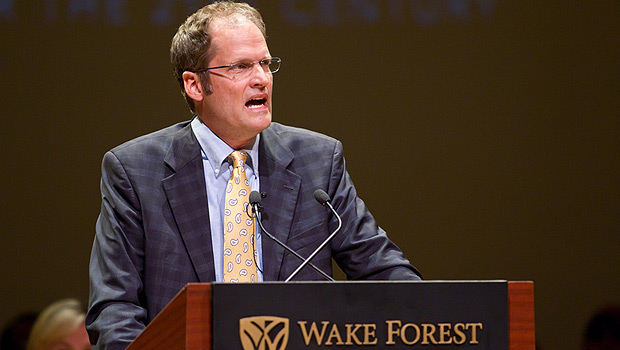 During times when religion is both a highly taboo topic and the center of many world conflicts, Dr. Stephen Prothero’s speech about the perils of religious ignorance brought an overflow crowd to Wake Forest on Tuesday night.

Prothero, a Boston University professor and highly regarded religious historian and commentator, spoke as part of the Voices of Our Time series, established by President Nathan Hatch in 2006. Prothero’s discussion of the problems of religious illiteracy attracted so many students, faculty, staff and Winston-Salem community members to Brendle Recital Hall that it was necessary to add multiple rows of seating behind the speaker’s podium.

Religious Literacy and the Professions

Prothero focused on the idea that with religion being one of the greatest forces for both evil and good in history, it is a civic problem that Americans know nothing about the religions of the world.

“Even if religion doesn’t make sense to you, you can’t make sense of the world without knowing something about religion,” Prothero said.

Senior history and religion double major Eason Armstrong said: “I liked that he reaffirmed what I have already learned in my classes about religion in the public sphere and its cross-cultural importance.”

Armstrong said he was struck by Prothero’s proclamation: “The United States is one of the most religious countries on earth, but Americans know almost nothing about religion.”

Prothero told the audience to read the Koran, read the Bible and talk to friends of different faiths as a way of educating themselves about different religious doctrines. He also gave specific advice to students to “educate yourself in a way that will allow you to support yourself” and to grapple with the big questions.

“For me the way forward is not some imagined unity,” Prothero said, “but by wrestling with the differences and having these differences be celebrated.”