Students rise to roles as twins 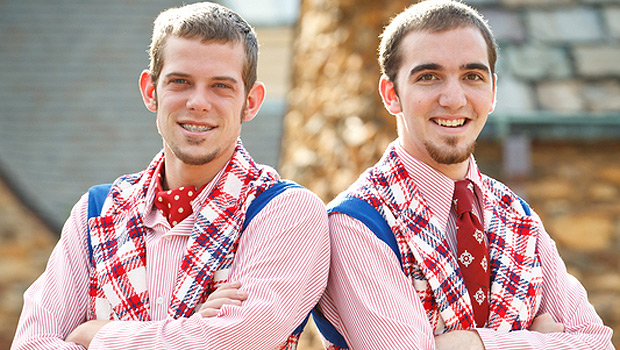 On Sept. 23, the curtain opened on The Brothers Menaechmus, the first fall production of the Wake Forest Theatre Department. On opening night, the audience at the MainStage Theatre in Scales Fine Arts Center laughed along as director John Gulley’s vision unfolded for one of Plautus’ greatest plays — a comedy that tells the story of long-lost identical twin brothers who unknowingly inhabit the same town.

Being cast to play a twin might seem incredibly difficult, but senior roommates Jake Meyers (Menaechmus I) and Ryan McCarthy (Menaechmus II) took the challenge in stride.

“Playing a twin was actually relatively easy for Ryan and me. We live together so we know each other pretty well,” Meyers said. “We didn’t spend a whole lot of time working on mannerisms … in the play we have not seen each other in something like 15-25 years. It works that we have differences.”

The two actors have succeeded in their roles.

Q: Your bio indicates that you really enjoyed rehearsals for Brothers Menaechmus. Why?

McCarthy: The main reason is the awesome cast for this show. Jake and I are roommates off-campus, and our other roommate, Wes Hughes, is also in the show. We’re all close with the majority of the cast, and it has been so much fun to work with them during this process. The comedic aspects to the show mean that we really have to work off of each other…. Playing around with different scenes and coming up with new ideas was really great.

Q: What would you say to freshmen considering theatre?

Meyers: I would encourage freshmen to join (the theatre department). Wake actually has a great theatre department.… The professors become mentors and parents, and the students become brothers and sisters. Theatre is just fun to do. I love it.

Q: As seniors, what do you plan on doing after graduation? Will you pursue theatre?

Meyers: I am hoping that after I graduate, I will be able to continue acting as a career. I plan on dedicating at least 5-7 years in pursuit of my dream, which is to become a screen actor.

McCarthy: I am planning on applying to law school here in the next couple of months. As far as theatre goes, I’ve heard that it can be useful in law school. Theatre has been a huge part of my time here at Wake, and I can’t imagine not doing it at all, (even if) it isn’t really a career path for me.