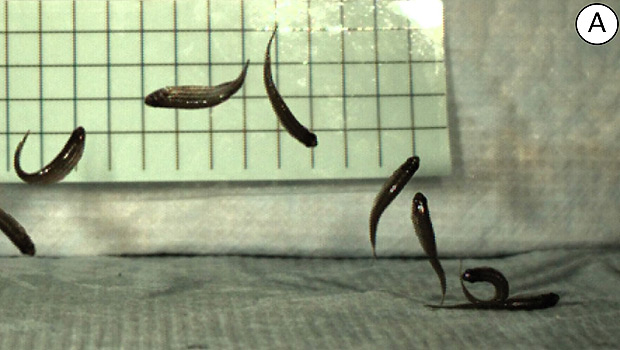 Who knew a fish out of water could be so coordinated? Associate Professor of Biology Miriam Ashley-Ross is on a team of researchers who discovered several species of fish can flip in the air to move more than 10 times their body length in one leap from the ground. The study appears in the Journal of Experimental Zoology Part A.

“The findings are significant because these are fish that are not specialized in any anatomical way for moving about on land, yet they are able to make these coordinated leaps rather than just floundering around,” Ashley-Ross says.

The on-land flipping talents of these acrobatic fish shed light on the evolutionary changes that helped fish make the transition from water to land about 350 million years ago.  “The study shows that you don’t necessarily need limbs to invade the land,” she says. “It is possible we could be looking at another vertebrate land invasion.”

Ashley-Ross describes the movement, “The fish is lying on its side and bends its head over its tail into a tight “C” shape, and then straightens the body, pressing its tail against the ground to spring up. They launch and do multiple flips in the air, often landing facing the same direction, which means that they are in the perfect position to leap again.”

This is quite different from the ineffectual flopping around and gasping most larger fish do when they are taken out of the water. In the study, the researchers placed the fish on a flat surface and then filmed their leaps with a high-speed camera. In the two species described in the paper, the mosquitofish won the distance competition over the zebrafish, but four other species the researchers have just begun studying can also move significant distances on land. It is clear this is not a rare adaption, but something common among many types of fish, Ashley-Ross says.  But, there may be a size limit.  So far, jumping has only been seen in small fish with slender body shapes.

In addition to fish movement, Ashley-Ross studies the biomechanics of seahorses and salamanders. She conducted this research, featured on BBC Nature, with lead author Alice Gibb from Northern Arizona University and two co-authors, Cinnamon Pace and John H. Long.