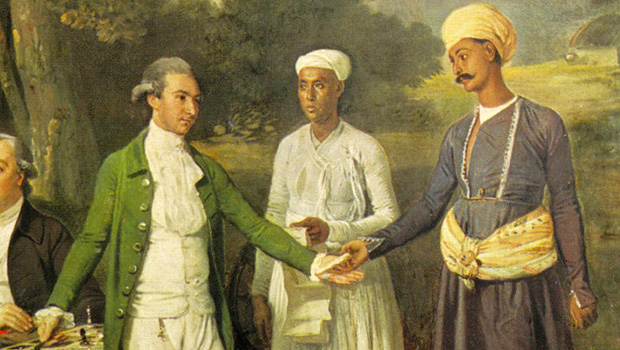 Three events this week will examine cultural exchanges between India and England during the 18th and 19th centuries.

Art historian Douglas Fordham, a 1995 Wake Forest alumnus, who now teaches at the University of Virginia, has published numerous books and articles that demonstrate the central importance of empire and imperialism to the development of the visual arts in England. This week, he will give two talks that focus on the role of India in shaping English political and artistic culture.

“The British presence in eighteenth-century India has typically been defined by its commercial interests and its military conquests. More recently, scholars have begun to emphasize the importance of cultural exchange in colonial India, and more specifically the exchange of portraits between Mughal rulers and East India Company officials. This talk offers a detailed examination of one such exchange in the Southern Indian city of Poona, and it situates this case study within the burgeoning field of Anglo-Indian art.”

British caricaturist James Gillray (1756-1815) was well-known for his satirical prints about politics, imperialism and domestic life. Fordham’s talk will examine Gillray’s representation of domestic interiors, and will explore whether the artist’s vision of the genteel household carried both domestic and imperial connotations. To what degree were Gillray’s images shaped by political ideals of empire; or current political arguments for and against colonial independence and self government?

For more information on this talk, see the Reynolda House Press Room.

Mary Ellis Gibson’s Tuesday lecture, “Performing Indian Authenticity in the London Fin de Siècle,” focuses on three poets Indian poets who wrote in English: Sarojini Naidu, Manmohan Ghose and Rabindranath Tagore, who received the Nobel Prize for Literature. Gibson will illuminate the strategies of self-representation adopted by poets who sought to forge an authentic voice while appropriating the imperial tongue.