From College to Careers 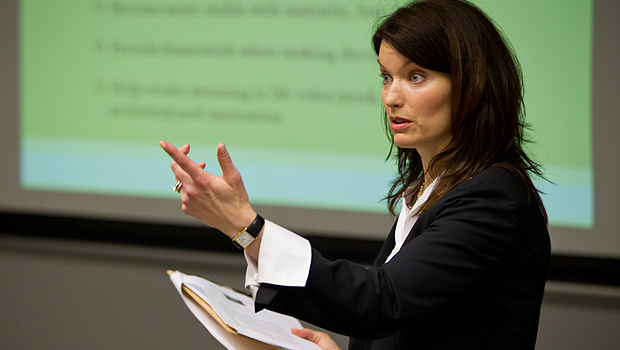 “Knowing yourself is the first step of pursuing a career.”

These aren’t the words of an executive life coach or a motivational speaker. They’re from Elizabeth Puett (’15), a first-year student from Austin, Texas.

Puett is one of about 40 students currently enrolled in “Options in the World of Work,” a half-semester course that began just after spring break. It’s the second in a series of four “College to Career” courses designed to better prepare Wake Forest students for life and work after college.

Taught by Heidi Robinson, an instructor in the Department of Counseling, and developed in conjunction with the Office of Personal and Career Development, the “College to Career” series has quickly become one of the most talked about and coveted elective courses at Wake Forest.

How else is Wake Forest preparing students for life after college?

From April 11-13, the University will host “Rethinking Success: From the Liberal Arts to Careers in the 21st Century,” a national conference to examine issues related to the relevance and value of a liberal arts education to the workforce today. Follow the conversation on Twitter with #RethinkingSuccess.

Learn more about the Office of Personal and Career Development. Spring appointments with career counselors are booking quickly.

Many students in Robinson’s current classes took the first course in the series – “Personal Framework for Career Exploration” – earlier this semester or last fall. Though historically students did not start thinking about their career direction or life after college until their junior or senior year, 90 percent of the students in the class last fall were underclassmen.

Connor Godfrey (’14), a sophomore from New York City, was one of them. He enjoyed exploring the personal attributes that will influence his future academic and professional decisions.

“For me, it was really a good experience because it helped me look deeper into myself, beliefs, values, and things I hadn’t thought about too much,” Godfrey said. His favorite project was the personal statement, which prompted students to create a brief video celebrating the people, places and experiences most important in their lives.

“There is a saying, ‘if you build it, they will come.’ These students didn’t just come; they conquered. They lined up internships right out of the first class, and they even networked with each other,” she said. “Seeing their horizons expand so quickly and broadly surpassed our expectations from when we first envisioned this curriculum.” 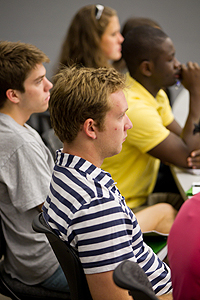 Gracious Addai (’13), a junior Business and Enterprise Management major originally from Ghana, has found the “College to Career” series to be inspiring yet practical.

“With a liberal arts degree, you’re open to anything as long as you can market yourself. I’ve had classes in the business school about personal branding and marketing yourself, but this is really unique for the college,” Addai said.

Over the next several weeks, he and his classmates will conduct a series of informational interviews with professionals, begin to build a professional network and explore the variety of careers and career paths.

Even though Puett isn’t sure what course of study she wants to pursue yet, the “College to Career” courses have actually boosted her confidence.

“As a freshman, it’s so relieving to realize that you’re not married to your major, that you’ll be OK and that you’ll find your way,” she said.

Each “College to Career” course is worth one and a half credits.

CNS 120. Personal Framework for Career Exploration
Students explore their own strengths, interests, beliefs and develop their decision-making abilities. The course asks students to consider their values and the influences that have helped them reach their current goals and understand the key personal factors that will inform their decisions regarding major, career and life while in college and beyond.

CNS 220. Options in the World of Work
Students begin the relevant and exciting task of considering which kind of careers may provide the greatest meaning and satisfaction in the world of work. Students conduct a series of informational interviews with professionals, begin to build a professional network and explore a range of careers as well as the role of graduate school.

CNS 320. Strategic Job Search Processes (starting Fall 2012 semester)
Students learn fundamental competencies to conduct and effective job search including how to effectively market themselves to employers, through digital/social media, resumes, networking and interviews. They learn job search frameworks and skills that will be utilized throughout their lives.

CNS 360. Professional and Life Skills (in development)
Students develop a personal action plan for succeeding in the workplace as well as leading a holistic life after graduation, balancing work, avocations and personal needs. Course work includes time and project management, on-the-job communication and relationship building, as well as the practical aspects of an independent life: personal budgeting and financial planning, and integrating Pro Humanitate into daily living.