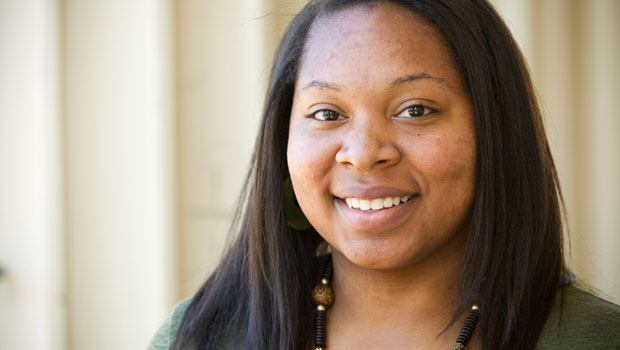 Wake Forest junior J’Taime Lyons of Whitakers, N.C., is among a distinguished group of undergraduate students nationwide who have been named 2012 Truman Scholars by the Washington-based Harry S. Truman Scholarship Foundation.

Lyons is one of 54 students from 48 U.S. colleges and universities named Truman Scholars. She is the 15th Truman Scholar at Wake Forest.

Lyons, who is majoring in sociology, plans to pursue a graduate degree in public policy with a focus on education.

“After graduation, I plan to become a Teach for America Corps member. In order to influence education and social policy, I must see what is happening first-hand,” says Lyons. “After graduate school, I hope to become an education policy advisor for a U.S. Senator, Representative or Governor. Eventually, I would like to be a state senator and eventually governor of North Carolina.”

Each merit-based scholarship provides $30,000 for graduate study for students who plan to pursue careers in government or other public service.

Specific selection criteria include outstanding leadership potential, commitment to a career in government or the not-for-profit sector, intellectual ability and likelihood of “making a difference.”

At Wake Forest, Lyons is a resident adviser, member of the Judicial Council and co-chair of the student government public relations committee. She is vice-president of Delta Sigma Theta sorority and the internal relations chair of Students for Education Reform. Lyons says she enjoys influencing policies and programs for a more inclusive, vibrant campus.

This summer, she is attending the Public Policy and International Affairs Junior Summer Institute at the Princeton University Woodrow Wilson School of Public and International Affairs  — a national program that prepares young adults for careers in public service. “I will have a crash course in public policy that will provide me with more skills to be an effective change-maker,” says Lyons.

All 2012 Truman Scholars will assemble this summer for a week-long leadership development program at William Jewel College in Liberty, Mo., near Harry Truman’s homeplace and will receive their awards in a ceremony at the Truman Library in Independence, Mo., on May 27.

For a listing of the 2012 Scholars and more information on the Foundation, see www.truman.gov.