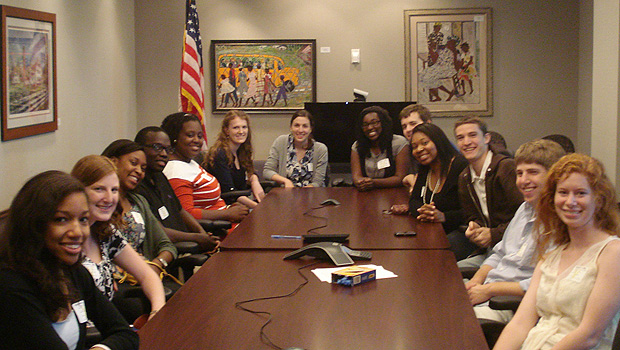 While class for “Political Sociology” captivates in Carswell Hall, it could hardly compare with the thrill of discussion in a boardroom at the Democratic National Convention offices in Charlotte.

Thanks to the tireless efforts of our professor, Dr. Hana Brown, we had the exceptional opportunity to hear about the intricate work that goes into staging one of the country’s most elaborate political gatherings with Theo LeCompte, the convention’s chief operating officer. While his job requires attention to detail down to the last camera position and power outlet, he clearly always kept the larger picture in mind and could articulate his vision as if the event were tomorrow.

Mr. LeCompte spoke about everything from his past experiences with event organizing, including the challenges of organizing a rally for Jon Stewart, to his work at the convention ensuring Charlotte’s readiness for the massive influx of guests. He shared some of the exhaustive plans to renovate and refashion the city’s stadiums, although Charlotte boasted facilities very ready to meet their needs.

While they took many considerations into account, the ability to save money on construction was a major deciding factor for the city to receive the convention. As he said, “We are trying to do what every American family is doing today – trying to get more from less.”

Something striking that I took away from our discussion with Mr. LeCompte was his office’s commitment to helping Charlotte, as well as the entire state of North Carolina, shine brightly on the national stage through the convention. He described their collaboration with the city in great depth as well as how the convention would boost the local economy. Even the paintings in the office came from regional artists!

The visit would fascinate anyone with an interest in politics regardless of party affiliation, but it also held a special significance for our class after many of the conversations we had over the course of the semester. We often talked about voter apathy and lack of turnout, two political pandemics that various institutions have tried to fight.

Some of this can be attributed to systemic barriers, and Mr. LeCompte spoke a great deal about how his office was working to minimize them at the convention to make the events accessible to the average American. Readings often make such tasks seem rather abstract, so seeing someone who actually put those principles into practice proved truly riveting for all.